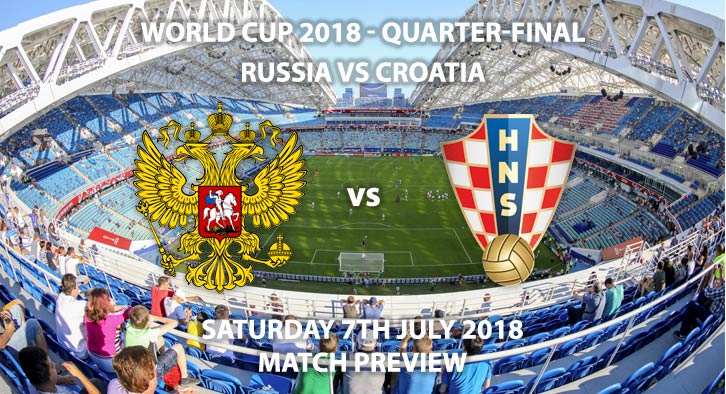 Russia vs Croatia – The last quarter-final sees hosts Russia face dark horses Croatia for a history-making place in the semis.

Both teams have massively impressed on their respective paths to this point. Russia kicked off the tournament in style with a 5-0 demolishing of unsuspecting Saudi Arabia. Followed by a comfortable 3-1 win over Egypt before losing 3-0 to eventual Group A winners Uruguay.

Perhaps the biggest shock of the last 16 was Russia eliminating Spain from the tournament. Proving that no one should underestimate the hosts. Midfielders like Alexsandr Golovin and Denis Cheryshev have provided output alongside the finishing of Artem Dzyuba up top. The latter two both have three in World Cup. This tournament has been a far cry from the horrendous 2016 European Championships where Russia came bottom of the group.

If possible, Croatia have made even more of an impact. Beating Nigeria 3-0 might have been expected, but winning by the same score-line against Argentina made the world take notice. A 2-1 victory against Iceland to round the group off saw momentum maintained. The 1-1 draw and subsequent penalty shoutout win against Denmark wasn’t exceptional, but Croatia are still alive and hungry to progress.

Croatia’s midfield duo in Ivan Rakitic and Luka Modric of Barcelona and Real Madrid respectively have stormed the tournament. Even without those two stars, there is quality throughout the squad in Monaco’s Danijel Subasic in goal, Liverpool’s Dejan Lovren and Atletico’s Sime Vrsaljko in defence, Ivan Perisic and Marcelo Brozovic of Inter Milan and Modric’s Real Madrid teammate Mateo Kovacic in midfield with vetern Mario Mandzukic up front.

Zlatko Dalic is ready to lead Vatreni to match and surpass the feats of the 1998 squad, who came 3rd. Russia manager Stanislav Cherchesov will be hoping to equal his nation’s best ever World Cup performance by reaching the last four too.

Russia have topped the running stats in terms of metres covered this tournament and their energy shows, always seeming to have another gear in the latter stages of matches. Amidst the huge doping scandals of late take of that what you will. This match may be a case of Croatia’s ability (or inability) to showcase the requisite quality to break down the Russian defence and withstand the counter-attack.

The Croats definitely have the squad to do it. The Russians have the home crowd on side to prevent it. The winner of England vs Sweden awaits in the semi-finals. A mouth-watering last four clash of England against the hosts could be on the cards. Glory. Is. Possible.

Keep visiting Tips and Previews ahead of games to get our suggested tips and correct score picks for the remainders ties in the quarter finals. Tips updated at 13:30 GMT on 7th July 2018.