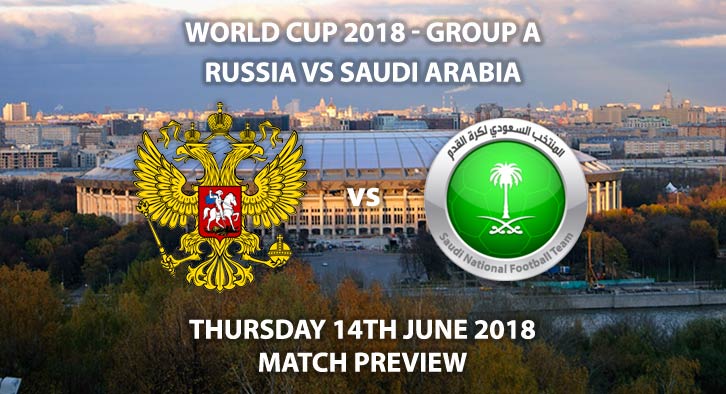 Russia vs Saudi Arabia – The World Cup is finally here! Hosts Russia get the tournament underway when they face Saudi Arabia, with both teams looking for the perfect start.

Russia will be hoping they can take advantage of the carnival atmosphere as they look to steal an early lead in Group A. The hosts will be hoping they can navigate their way out of the group stages and this game is a must win if they are to do that. With Egypt and Uruguay favourites to take the first two spots, Russia need three points to have any chance of causing an upset. If they are to progress, much will rely on the performances of Fyodor Smolov. The FK Krasnodar striker is expected to lead the line for Russia after scoring 15 goals in 24 appearances this season. Former Chelsea defender Yuri Zhirkov is also expected to start in a left-wing-back role. He proved he is more than capable of chipping in with a goal or two during his spell in London.

Saudi Arabia proved that they won’t be easy opposition after they narrowly lost 2-1 to world champions Germany last Friday. Like Russia, their hopes are pinned on their star striker, Nawaf Al-Abed. The Al-Hilal striker scored five goals during qualification; making him their top-scorer on the road to Russia. With tougher opponents to come, Saudi Arabia also know they have to win this match to stand any hopes of qualifying. They will relish the task of spoiling the Russian party on the biggest stage.

Nestor Pitana is the referee for the World Cup opening match. He made his debut in the Argentinian league in 2007 and officiated his first international match in 2010. At the 2014 FIFA World Cup Brazil™, he oversaw four fixtures including France-Germany in the quarterfinals. In his last 83 international matches he has averaged 4.71 yellow cards and 0.25 reds. With that in mind, I would advise a maximum total match booking points of 40+.

Both teams are likely to be nervous coming into this match, which could make it a cagey encounter. An early goal would be perfect for either side, especially the hosts. I think, however, Russia will have just enough to get off to the perfect start.

Russia vs Saudi Arabia will be televised live in the UK on ITV 1 with kick-off at 16:00 GMT.