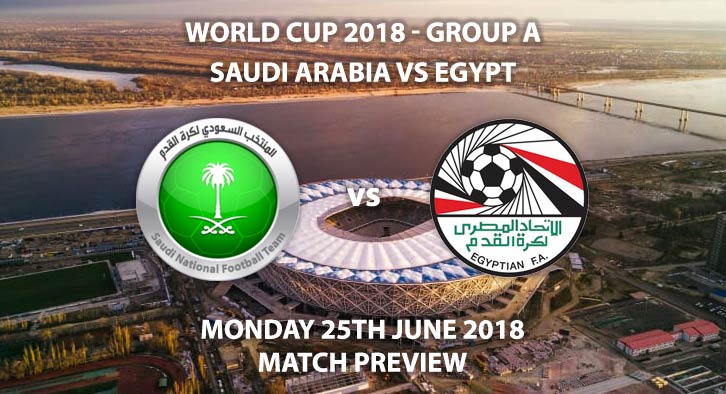 Saudi Arabia vs Egypt – the two bottom sides in Group A face off with each other looking to restore some pride with both sides already out of the World Cup.

With two defeats from two, Egypt will exit the competition after this match. Despite Mohamad Salah’s inclusion, they were comfortably beaten 3-1 by Russia. The Liverpool playmaker didn’t look 100% fit after his injury in the Champions League final but still grabbed a consolation goal for his side from the penalty spot. It’s been an underwhelming campaign for Egypt, who haven’t shown enough quality to warrant a place in the knockout rounds. Salah’s injury – as well as conceding a 90th-minute goal against Uruguay – has compounded that. They will be left wondering what could have been. Still, this match offers Salah and co the chance to give their supporters something to cheer about. They’ve only conceded goals in the second-half, which may be worth a bet for this game. Equally, Saudi Arabia’s lack of attacking threat could offer them a chance to register a clean sheet.

After getting off to the worst start against Russia, Saudi Arabia lost 1-0 to Uruguay in their second match. That result ended their stay in Russia, but they will still be hoping for their first goal and point against Egypt. Despite losing both games, Saudi Arabia have illustrated that they can play some nice football. The difference in both games has been in both boxes, rather than an inability to pass the ball. Against Uruguay, they had the lion share of possession, especially in the first-half. However, in defence, crucial lapses in concentration and upfront they’ve lacked a goal threat, which has ultimately cost them their place at the World Cup. They have conceded six goals in their first two games and with Salah to come, that number could soon increase.

Wilmer Roldan is the referee for this match. The Colombian has officiated 126 international matches, where has averaged 5.3 yellow and 0.6 red cards. With that in mind, I would advise a maximum of 40+ booking points.

Both these sides will want to sign off with a win. Egypt have a lot more quality in both boxes, which could prove decisive. It would be nice to see Saudi Arabia prevail as they try to play football the right way. Sadly, I don’t think that will happen and I expect Egypt to win.

Saudi Arabia vs Egypt will be televised live in the UK on ITV 4 with kick-off at 15:00 GMT.