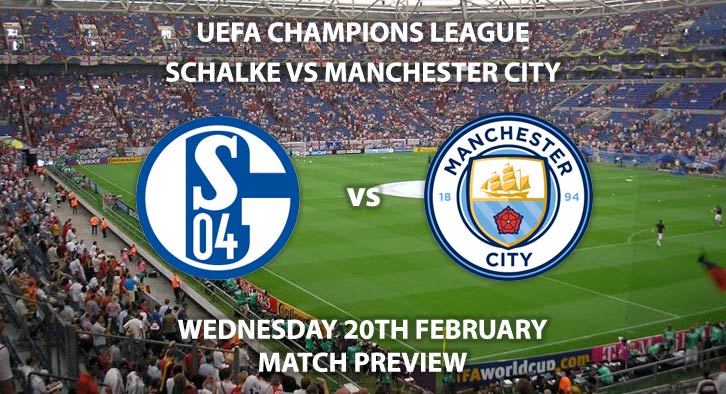 Bundesliga side Schalke will play host to Premier League champions Manchester City in the first leg of their round of 16 tie in the UEFA Champions League.

Both clubs had rather simple routes through to the knockout stages. The Germans came second in Group D however finished seven points above Galatasaray in third. Meanwhile, Manchester City topped Group F with 13 points.

Schalke are priced at a huge 10/1 to win this match by SkyBet. The hosts enter this match on a pretty bad run of form – especially considering they face the tournament favourites. They have just two wins from their last seven matches in all competitions. However, their home European record makes for much better reading. They are unbeaten in nine home European matches and a player hoping he can get the crowd off their feet will be Mark Uth. The striker has not had a great season in front of goal however has scored in the campaign this season. He is 4/1 to score anytime.

They often don’t have a boring match either in this competition. Their last eight home matches in the Champions League has seen them concede an average of 2.25 goals. They are 18/1 to win and for both teams to score.

Manchester City are easy favourites for this match and are priced at 1/4 to win. Pep Guardiola will be hoping his side can still win the quadruple this season. They have won nine of their last ten matches in all competitions – scoring 37 goals and conceding 4. It’s safe to say they are in form. One man in red hot form is Sergio Aguero. The Argentine has scored two hatricks in his last three matches. He will be a nightmare for the German defence and is 11/4 to score first.

The referee for this match will be Spaniard Carlos de Cerro Grande. The referee will likely be going to his pocket a fair few times, as European knockout matches always produce plenty of booking points. 50+ booking points are priced at 11/10 by SkyBet.

Schalke vs Manchester City will be televised live in the UK on BT Sport 2 and kicks off at 20:00 GMT.

– The visitors are stronger in all departments. An away crowd shouldn’t affect their performance.

Odds and markets last updated on Wednesday 20th February 2018 @18:30 GMT. Keep checking back to see if there’s any updates to markets – the time stamp in the previous sentence for when we update tips on this page will be updated.