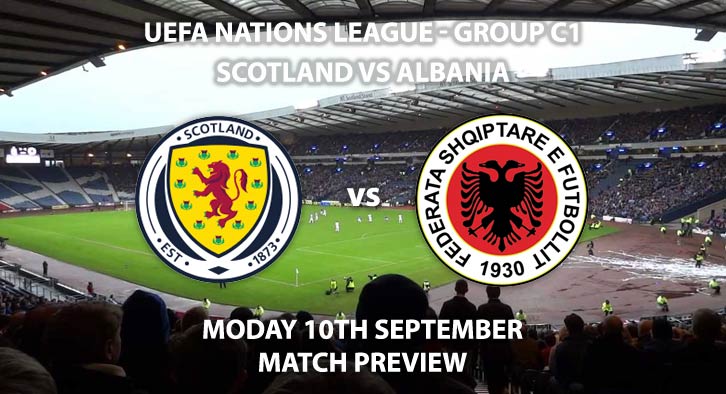 Scotland vs Albania – Scotland take on Albania looking to get off to the perfect start in their UEFA Nations League group.

Scotland were royally thumped 4-0 on Thursday as they took on Belgium. Despite holding Roberto Martinez’s side at 1-0 for the first half, they conceded three quickfire goals in the second 45. That result just underlined the size of the task ahead for Alex McLeish. Don’t get me wrong; nobody expected them to beat Belgium, but the gap in quality was stark. Against Albania, they will be much more evenly matched. If Scotland want to qualify for EURO2020, building some momentum in the UEFA Nations League could be vital. A string of positive results could help inject some much-needed confidence into the players, but also their supporters.

Leigh Griffiths will be fit to play for Scotland, despite nursing an ankle injury picked up against Belgium. They are already without Oliver McBurnie, so the Celtic forward will be crucial in their search for goals. One major dilemma for Mcleish is how to get the best out of both Andrew Robertson and Kieran Tierney. The Scotland skipper started at LWB against Belgium, with his Celtic counterpart at LCB. There have been suggestions, however, that Robertson could start in a more advanced position, with Tierney behind him at LB.

Albania, like Scotland, will be hoping to use his competition as a springboard for EURO2020. For the first time ever, they qualified for a major tournament when they featured in France 2016 and will hope to do the same again, four years on. Their biggest threat is striker Sindrit Guri. The 24-year-old plays for KV Oostende in the Belgian Premier League. Last season he scored 21 goals in 38 appearances in all competitions, also registering six assists. If Scotland are to win, they will have to keep this man quiet.

Matej Jug is the referee for this match. The Swedish official has averaged 3.86 yellow and 0.15 red cards per game across 81 international matches. Therefore, I would advise a maximum booking points total of 40+ for this game,

This will be a tougher test for Scotland than some may think. On paper, Scotland’s side looks stronger, but Albania do have a few dangerous players, capable of causing problems. However, I still think Scotland will edge this one, roared on by their home crowd.

Scotland vs Albania will be televised live in the UK on Sky Sports Football with kick off at 19:45 GMT.