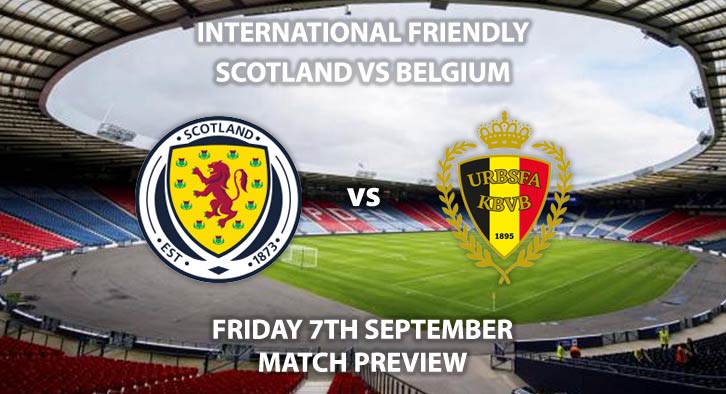 Scotland vs Belgium – the visitors face Scotland at Hampden Park in their first match since finishing third at last summer’s FIFA World Cup.

Belgium take on Scotland in the first of their international doubleheader, before facing Iceland in their first UEFA Nations League game. Roberto Martinez will be without Kevin De Bruyne and Adnan Januzaj, who are the only two injured absentees from their World Cup squad. Former Newcastle goalkeeper Matz Sels and Christian Benteke have both been recalled to the squad. There are first call-ups for Atalanta’s Timothy Castagne, Club Brugge’s Hans Vanaken, Gent midfielder Birger Verstraete and Genk forward Leandro Trossard.

After finishing third at last summer’s World Cup, Roberto Martinez’s sights are firmly set on EURO 2020. Like so many nations, Belgium will be increasingly concerned that their ‘golden generation’ is yet to secure a trophy. We have seen England fail despite having their most talented crop of players; the same can be said for Croatia, although they did reach the World Cup final. It’s vital Belgium pick up a trophy in the next four years, to avoid being branded as another talented but trophy-less nation.

Scotland will be hoping to get off to a good start in their EURO2020 qualifying campaign by building momentum against Belgium. The Scots also face Albania in their first UEFA Nation League match on Monday. Andrew Robertson has been named as the new captain for Scotland, following in a long line of influential names. They will be without Swansea striker Oli McBurnie for this game, who has been ruled out through injury. Steven Naismith now of Hearts is his replacement, whilst there are is also a spot for his uncapped teammate, John Souttar.

Luca Banti is the referee for Friday’s game. The Italian referee plies his trade in Serie A, although he has only officiated one match this season. In that game, he didn’t brandish a card; therefore I would recommend a maximum of 20-30+total booking points for this game.

Belgium won’t be at their World Cup level, they’re one of the best team’s in the world. As a result, I fancy them to get a comfortable result, although Scotland won’t just roll over.

Scotland vs Belgium will be televised live in the UK on Sky Sports Football with kick-off at 19:45 GMT.