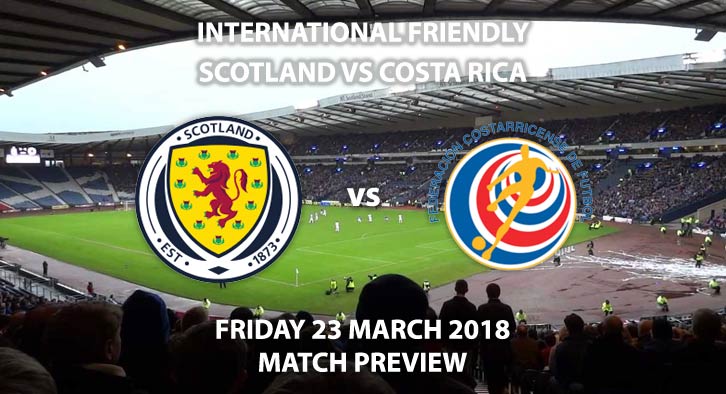 Scotland vs Costa Rica – Scotland will still be feeling the heartache of not reaching the 2018 World Cup in Russia as they narrowly missed out on qualification on goal difference. Their late impressive surge was not enough as they conceded 5 more goals than World Cup qualifiers, Slovakia. Meanwhile, Costa Rica are on a high and preparing for Russia as they qualified in second place in the North and Central American group.

The two nations have only met once before back in 1990 where Costa Rica won 1-0. Both sides were also unsuccessful in their previous outings by the same score line. Scotland lost to the Netherlands and Costa Rica lost to Hungary.

The match will also mark Alex McLeish’s second reign as Scotland manager following Gordon Strachan’s departure. Another big change in the Scotland camp will come in midfield after Scott Brown announced his retirement from international football.

The hosts are favourites for this encounter despite being to team who did not qualify for the World Cup. They have also welcomed a flurry of fresh faces to their camp, with Manchester United midfielder Scott McTominay carrying the most expectation on his young shoulders. He is joined by Barnsley striker, Oli McBurnie, who has been firing off on all cylinders since his loan spell began. Alex McLeish’s side will want to make a statement and build on their impressive end to last year in the qualifying campaign.

The visitors will be preparing for the World Cup and this fixture provides a final chance to try out new things. The most successful central American nation in history have some real talents amongst their ranks for Fridays fixture. Real Madrid goalkeeper Keylor Navas will provide a very tough opponent for the Scots between the sticks. Meanwhile Bryan Ruiz and Marco Urena will be hoping to light up the Costa Rican attack with their combined 167 caps.

A big loss for Costa Rica is the absence of Real Betis loanee Joel Campbell. The experienced international is still nursing an ankle injury and will be a big miss for the central American outfit.

Scotland vs Costa Rica will be televised on Sky Sports Football in the UK and will kick off at 19:45 GMT.

Keep visiting the tips and preview area for further updates and betting previews for more previews from the International break.