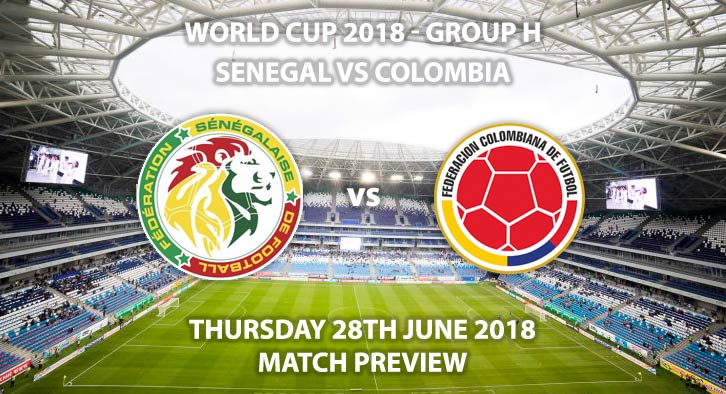 Senegal vs Colombia – Group H comes to a fiery close with Senegal and Colombia both harbouring aspirations of qualifying in this winner-takes-all affair.

With Poland already eliminated, the remaining three teams in Group H are all battling for the top two spots. This group has been hotly contested with a few surprise results to boot. Japan are currently top, which causes some interesting permutations for either side to qualify.

Senegal’s first two matches were a dominant 2-1 victory over Poland and a 2-2 draw with Japan. So, Aliou Cisse’s side have four points, the same as Japan, who beat Colombia 2-1 in their opening game. Colombia’s last match was a 3-0 hammering of the lacklustre Poland, so Jose Pekerman’s team are a point off the pace.

Hence, Senegal need just a point to guarantee passage into the knockout stages. Colombia can also afford to draw as long as Japan lose, due to their superior goal difference. Senegal can also lose should Japan get beaten by Poland by a greater margin. This makes for an incredibly interesting last matchday in Group H, where truly anything could happen.

Colombia’s last match showcased everything we expected of the South Americans. Energy, pace, flair and incisive passing were met with clinical finishing to swat Poland away. James Rodriguez crucially proved what a world-beater he is by turning on the style. Particularly with his glorious through ball for Juan Cuadrado’s, and Colombia’s third goal. Rodriguez to score first and Colombia to win 3-1 is a massive 80/1 with SkyBet.

Senegal have also been an absolute pleasure to watch. They have completely dispelled the reductionist claims that African teams are tactically inept. Yes, Senegal have the overused phrase ‘pace and power’ in abundance but more than that The Lions of Terunga are defensively sound and the midfield has a lovely balance to it. The positional awareness of the side allows the destructive forward players such as Sadio Mane to wreak havoc.

This was prevalent in Mbaye Niang’s goal against Poland, putting pressure on and capitalising on the woeful Polish defending. Niang to score first and Senegal to win 1-0 or draw 1-1 is a very big 28/1 with SkyBet.

Whichever of the two sides makes it through, perhaps it could even be both, they will surely be deserved. It is important to note that the winner of this group will face second place in England’s group and vice-versa. England vs either Senegal or Colombia could be a fascinating watch.

All the suggested tips on SkyBet can be found under popular bets.