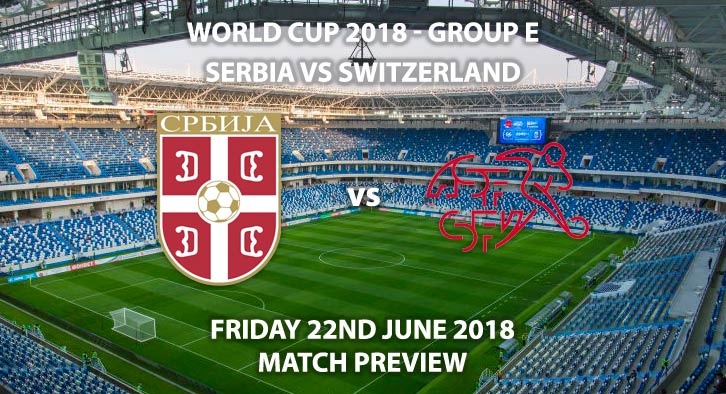 An Aleksandar Kolarov thunderbolt free-kick saw Serbia beat Costa Rica 1-0 and top the group. If you haven’t already, go and watch it. A first World Cup win since 2010 was the ideal way to begin the tournament.

The Eagles have a lot of World Cup heritage under the previous nation’s titles. Yugoslavia have twice finished 4th (1930, 1962) and made it to the quarter-finals three times (1954, 1958, 1990). Today’s Serbia are not expected to reach those heights but in players like Manchester United’s Nemanja Matic and Lazio’s highly-coveted Sergei Milinkovic-Savic there is the capability to hurt anyone. Crystal Palace’s Luka Milijovevic and Southampton’s Dusan Tidac add further quality.

The aforementioned midfielders were highly impressive against Costa Rica and will need to be again here. The midfield battle will be key, with Granit Xhaka and Valon Behrami providing stern competition in the middle for Switzerland.

A win for Serbia will all but guarantee qualification from the group for the first time in 20 years. A draw would still be somewhat positive, however with Brazil left to play that is an unwelcomed risk. Hopefully despite the necessity to win, Serbia can remain faithful to the slick centralised passing that saw off Costa Rica. Serbia to win is 9/5 with bet365, or to win 1-0 is 13/2.

Switzerland are currently ranked 6th in the FIFA World Rankings. Yes, 6th. Many turn their noses up at that number, often citing selective friendlies or an outdated system as the reason. However, there is much more than meets the eye here.

Rossocrociati have lost only once in their previous 18 fixtures, which included a run of ten consecutive victories. In those 18 games, Switzerland kept 12 clean sheets, facing Portugal twice alongside last week’s World Cup opener against Brazil.

Vladimir Petkovic’s side earned that point against Brazil too. True, selecao were nowhere near their best but Switzerland limited Brazil to very little clear-cut chances. All the while looking dangerous on the break, particularly through Xherdan Shaqiri. The Stoke winger is an appealing 6/1 to be first goalscorer with SkyBet.

The stipulations are still very much in Swiss hands. A win here makes this comfortable, needing just a point in the last game against Costa Rica. Even a draw could be fine if Brazil beat both Costa Rica and Serbia on the last day. This would mean Switzerland would have to beat Costa Rica, but would be big favourites to do so anyway.

The lack of a prolific goalscorer often seems to be the glaring weakness for The Swiss, but solidity in defence, a quality goalkeeper in Yann Sommer and dangerous forwards in Shaqiri and the young Breel Embolo could produce something memorable in Russia. A win on Stephen Lichtsteiner’s (now of Arsenal) 100th cap would be special.

Both sides have proven over the last couple of years that they are solid and balanced. They could well cancel each other out, hoping for a moment of quality to perhaps decide it. With a match of this significance, that is often the case.