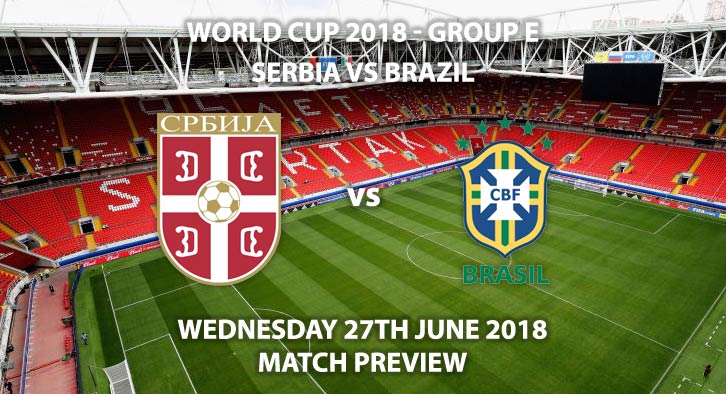 Serbia will play Brazil in their final group stage match at the 2018 FIFA World Cup final. Both nations are in a position to qualify for the knockout stages, with the result from the other match in Group E maybe being a key factor.

Serbia are currently on three points in the group after their dramatic defeat to Switzerland in their last outing. Aleksandar Mitrovic’s early goal was not enough for the Serbians who struggled to keep possession throughout the match. They are priced at 11/2 to win the match on SkyBet.

They have also racked up the cards so far, with six cards in their four matches. With the tricky Brazilian attack running at their defence, it’s likely they could see a few more cards.

Brazil are first in the group with four points. They haven’t yet provided a dominant display but have proved their attacking flair. Their recent 2-0 victory over Costa Rica seemed to be heading for a draw before two stoppage time goals from Coutinho and Neymar.

They are favourites for this match and rightly so. SkyBet have them priced at 8/15 to win. They could ramp up the goal tally and are priced at 21/10 to score 3+ goals. This will require Neymar and Gabriel Jesus to become a little more clinical – a feat they are more than capable of.

Mitrovic and Neymar are the two biggest goal threats for each nation. You can back both players to score at 6/1 which is a very tempting market. The game should produce a few goals and these two players can score from plenty of different methods.

The referee for this encounter will be Alireza Faghani . He could be kept busy with the aforementioned abrasive Serbia however with so much at stake, I’d expect the Brazilians to also bring a physical aspect to the match.

Tips updated at 17:40 GMT on 27th June 2018. Markets unlikely be updated again prior to the game kicking off.