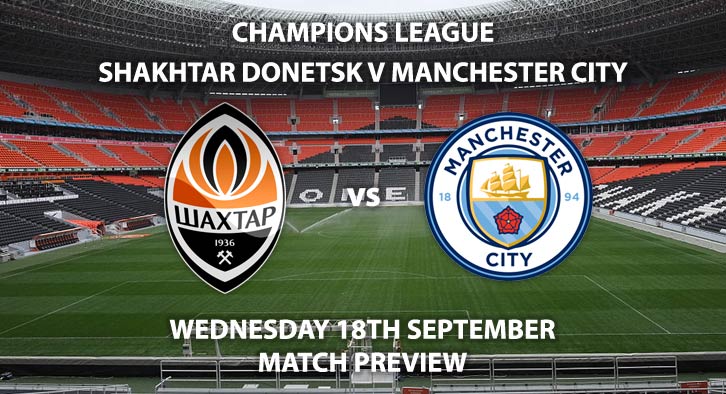 Manchester City begin their 2019/20 UEFA Champions League campaign with a trip to Ukraine as they face Shakhtar Donetsk on Wednesday night.

Pep Guardiola’s side enter this year’s competition as the bookmaker’s favourites to claim European silverware, with SkyBet offering odds of 10/3 for City to be crowned Kings of Europe.

Manchester City were joined by Atalanta, Dinamo Zagreb and Tuesday’s opponents Shakhtar Donetsk in Group C following the draw, with most, if not all predicting City to cruise through the group with ease.

Their opponents currently sit at the top of the Ukrainian Premier League and boast a 100% record with seven wins from seven matches played. Donetsk defeated Zorya in their last fixture, winning 4-3 on home soil.

This will be the fifth time these two sides have met on the European stage, with City winning 4/5 affairs with relative ease. Their most recent meeting was in November 2018, where Guardiola’s side ran out 6-0 winners. Donetsk’s only ever victory over City came in the 2017/18 Champions League Group stage, where the Ukrainian side won 2-1, and in doing so ending City’s 29-match unbeaten run at the time. Shakhtar are priced at 8/1 on SkyBet to win on Wednesday night.

City come into Wednesday night’s clash following Saturday’s unexpected defeat to Premier League new boys Norwich City. A defeat which raised questions of City’s defensive capabilities in light of the injury sustained by Aymeric Laporte in the win over Brighton prior to the International break.  Will Guardiola stick with the centre-back pairing of Otamendi and Stones after their showing against The Canaries.

I, like most am expecting a strong response from Manchester City following their weekend defeat, and so too will their manager, Pep Guardiola. He and his City side strive for perfection, and three points will be the priority for City. However, as Shakhtar have shown already this season they are a side in a good run of form and will pose a threat, and potentially look to target the centre of that Manchester City backline. Despite Shakhtar’s strong start to their league campaign, I can only see a City win on Wednesday night.

This fixture will be shown live on BT Sport 3 with kick off scheduled for 20:00 BST.