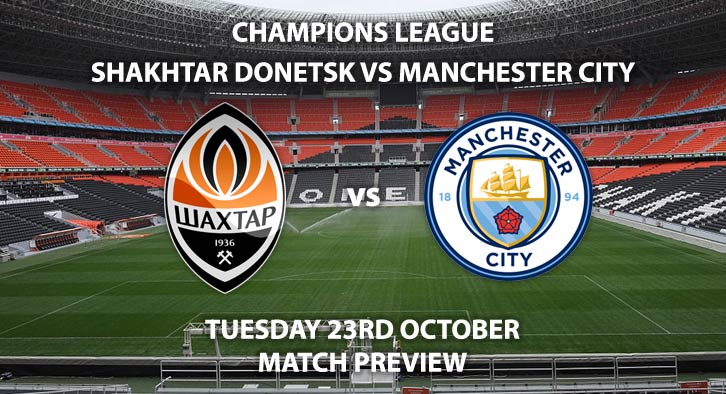 Shakhtar Dontesk vs Manchester City is this week in Champions League action in Group F.

Neither team has set Group F alight yet, with only one point separating them. The home side have managed two draws against Hoffenheim and Lyon. Meanwhile, Pep Guardiola’s side avenged their disappointing 2-1 opening loss to the French side with victory over Hoffenheim in their previous outing.

The home side will have their work cut out for them as SkyBet price them at 13/2 to cause an upset. They have held their own so far in their European campaign however will face their toughest test on Tuesday. Their domestic form makes for good reading however, and the impact of playing on home soil can only be a bonus.

Brazilian striker Junior Moraes has already bagged twice in the UCL and will be their biggest threat to City’s defence. The 31-year-old is 2/1 to score anytime.

Their defensive record is mightily impressive also. They have conceded only six goals in 12 league games this season. If they do manage a miracle and win the match, for them to win to nil is 18/1.

Manchester City are favourites for this encounter. SkyBet have priced them at 4/11 to double their points tally so far. The Citizens enter the match on the back of a 5-0 thumping of Premier League Burnley. They managed five different goal scorers however among them was Sergio Aguero. The Argentine has been firing on all cylinders, as usual, so far with one goal in European competitions and six in the Premier League. Aguero is priced at 3/1 to break the deadlock.

Guardiola’s side are yet to manage a clean sheet in Group F however have kept a clean sheet in 62% of their domestic outings. 75% of them away from home. Although Shakhtar can pose a threat, it is likely City will stay strong. SkyBet have priced an away clean sheet at 6/4.

The referee for this match will be Benoit Bastien. The official referees in the French Ligue and has averaged 3.83 cards in his six matches in charge.

Shakhtar Donetsk v Manchester City will be televised on BT Sport 3 and kicks off at 20:00.

– The travelling outfit have far too much quality and need to assert their dominance now before they run out of time.

Odds and markets last updated on Tuesday 23rd October 2018 @16:34 GMT. Keep checking back to see if there’s any updates to markets – the time stamp in the previous sentence for when we update tips on this page will be updated.