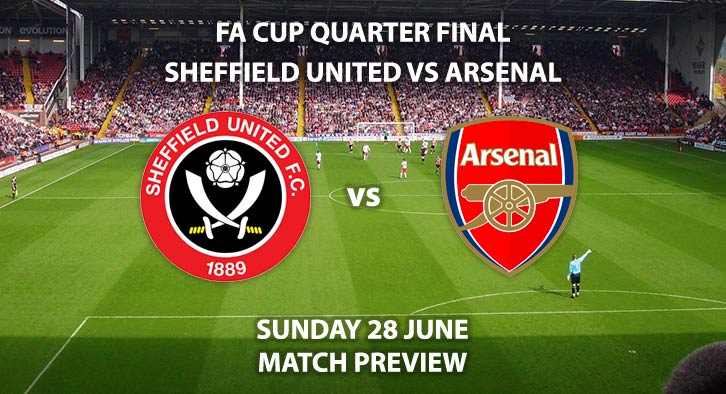 Sheffield United will host Arsenal in the quarter-finals of the FA Cup on Sunday afternoon.

The Blades got past Championship side Reading in the last round, after a Billy Sharp strike in extra-time booked their spot in the final eight. Meanwhile, comfortably beat League One Portsmouth with goals from Sokratis and Eddie Nketiah back in March.

Sheffield United are underdogs for this match despite having home advantage and are priced at 15/8 to win by SkyBet. The Blades have been slow to get going since they returned to the pitch in the Premier League – with two straight 3-0 defeats at the hands of Newcastle and Manchester United after a draw with Aston Villa. However, they are yet to play at home – where they boast an impressive four wins from their last six matches.

In attack, Oli McBurnie is likely to feature after Lys Mousset picked up a foot injury and is priced at 12/5 to score anytime.

Arsenal will have to improve on their performance in their win against Southampton on the weekend and are priced at 7/5 to advance into the final four with a win in 90 minutes. Mikel Arteta’s side finally blew a sigh of relief after their 2-0 win over the Saints but life has not been easy since the restart. They have suffered several injuries to key players and have been embarrassed by Brighton and Manchester City. They face an out-of-sorts Sheffield United, but how they approach this match is anyone’s guess.

In attack, talisman Pierre-Emerick Aubameyang is likely to start and is priced at 11/8 to score anytime

Last time these two met in the Premier League, a late John Fleck goal cancelled out Martinelli’s strike on the stroke of half-time. 30 booking points were brandished as they shared the points back in January. SkyBet are offering 13/8 for 50+ booking points this time around.

Sheffield United vs Arsenal will be televised on BT Sport 1 HD and kicks off at 13:00 BST.

– Neither side has been at their best since returning so they could need extra-time and penalties to settle this one.