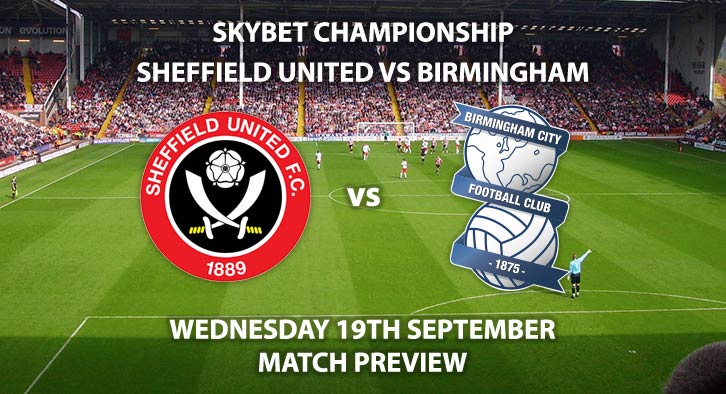 Sheffield United vs Birmingham City – the two clubs’ campaigns have commenced in different fashions. The hosts have won four of their seven outings and sit comfortably in the play-off places. Meanwhile, the visitors are struggling to find three points yet, with five draws from their opening seven matches.

Sheffield United are priced at 17/20 to win on Wednesday. The Blades have been impressive so far in attack with 12 goals to their name. Talisman Billy Sharp has bagged three so far and could be a thorn in the back of the Blues defence with his pace and unpredictability. The Englishman is 7/2 to score first – worth backing.

Sheffield enter the match after a disappointing loss to Bristol City however they have a habit of answering defeat with victory. Last season in over 50% of their matches after a loss, they would claim three points. Sheffield also have a habit of starting brightly. In 17 of their 20 victories last year, they entered the break ahead. Sheffield United to win at half time is 11/8.

Birmingham are the obvious outsiders for this one, priced at 16/5. They’ve not performed as badly as their table position suggests. However, their chance creation to goals ratio makes for poor reading. Lukas Jutkiewicz has been a dominant force spearheading with his aerial ability. The target man is 11/4 to score anytime.

Blues have managed to draw five of their seven matches and manager Garry Monk has been a picture of frustration to date. A draw seems a likely result yet again – with a tempting price of 5/2.

The referee for this fixture will be Gavin Ward. The two teams haven’t been strangers to the referees pockets this season. Birmingham have averaged 16.4 booking points and the hosts have averaged 17.2.

Sheffield United vs Birmingham City will be televised on Sky Sports Football HD and kicks off at 19:45.

– The Blades should have too much quality for the visitors. Expect both teams to score.

Odds and markets last updated on Wednesday 19th September @15:42 GMT. Keep checking back to see if there’s any updates to markets – the time stamp in the previous sentence for when we update tips on this page will be updated.