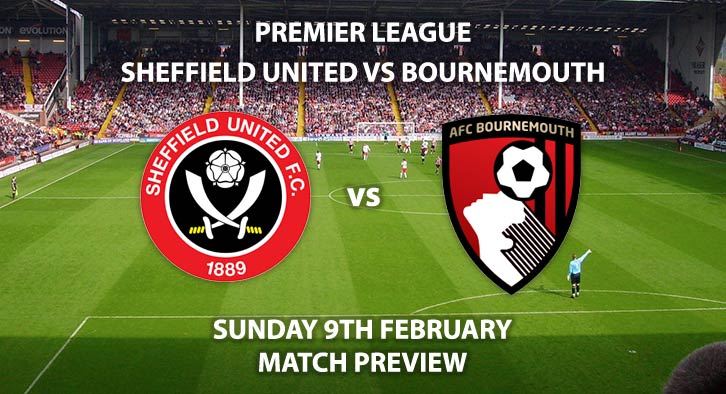 Sheffield United return to home soil this weekend as they welcome Bournemouth to Bramall Lane on Sunday afternoon.

Both sides will be keen to build on victories in their last league encounters. Bournemouth picked up a crucial win over fellow strugglers Aston Villa, meanwhile Sheffield United defeated Crystal Palace 1-0 at Selhurst Park.

Eddie Howe’s saw his side claim back-to-back wins for only the second time this season. Before their wins, the Cherries had lost four in a row, conceding ten and scoring none. Their most recent win moved them out of the relegation zone and up to 16th, two points clear of the drop zone.

Sheffield United on the other hand are flourishing in their first season back in the top flight following a nine-year absence. The Blades are sitting pretty in 6th place, and a win this weekend would see them leapfrog Spurs into 5th position. Chris Wilder’s side have lost one of their last six in all competitions, and in that time secured a place in the fifth round of the FA Cup. Had it not been for Liverpool’s and Manager Jurgen Klopp’s brilliance this season, Chris Wilder would surely be in pole position to scoop the manager of the season award.

These two sides met on the opening day and played out a 1-1 draw at the Vitality stadium. Billy Sharp’s last-minute equaliser sent the travelling Blades into ecstasy on that day, and kick-started their dream return to life in England’s top-flight.

In the sixteen meetings on record between these two sides, Sheffield United have lost once, winning ten and drawing five. The stalemate back in August ended a 22-year unbeaten run for the Blades in this fixture. Bournemouth’s only win on record in this fixture came in August 1987.

The referee for this encounter is John Moss. The 49-year old has been one of the more lenient referees this season, averaging just over three yellow cards per match in the Premier League. Moss has however awarded two red cards this season. This considered, I would recommend a maximum of 40+ booking points for this fixture.

Sheffield United vs Bournemouth will be televised live in the UK on BT Sport 1 HD with kick-off at 14:00 GMT.