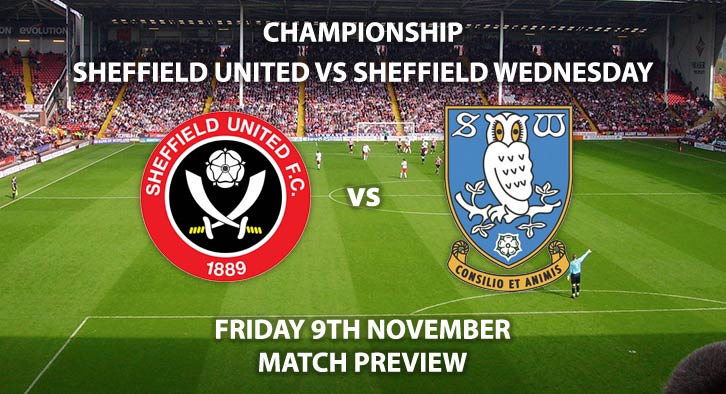 United vs Wednesday: Sheffield United will be looking to go back to the top of the Championship when they take on city rivals Sheffield Wednesday in the Steel City derby at Bramall Lane.

The Blades dropped off the summit of the league following their 1-0 defeat at Nottingham Forest last weekend. That left Chris Wilder’s team third in the division, one point behind joint leaders Leeds United and Norwich City. Despite their lofty position in the table, United have won just once in their last four league outings. However, they have only lost once at home this season, which came on the opening day of the season against Swansea City. Their main threat comes in the form of Blades fan Billy Sharp. The 32-year-old already has 11 goals this season, with seven of those goals coming in his last seven games. Given their position in the league, United go into this derby as overriding favourites, just as they were when the two sides last January at Bramall Lane. That match ended 0-0, despite Wednesday being reduced to ten men, which goes to show that form means little in these types of games.

Sheffield Wednesday were in sixth before the international break, but four straight defeats has seen them plummet to 17th in the table, four points above the relegation zone. Jos Luhukay’s first game as Owls boss came in this fixture in January, and he will be hoping a positive result can ensure it won’t be his last. Wednesday are the only side in the league yet to keep a clean sheet. They have conceded ten goals in their last three matches, which is an alarming stat. Yet, the Owls were conceding a similar rate last season before this fixture and came away with a commendable draw. They’ll be hoping to welcome back Fernando Forestieri, who has missed the last four games through injury. The Italian and Marco Matias are both expected to be named on the bench which will bolster their attacking options.

Andre Madley is the referee for Friday night’s clash. The Englishman has officiated 11 matches at this level this season, accumulating an average booking points total of 29.5. As a result, I would advise a maximum of 60+ total points for this fixture (it is a derby).

The form guide tells you that this game should end as a comfortable home win. However, form goes out of the window when it comes to a derby game like this. Wednesday’s result last January in similar circumstances highlights that, whilst having Forestieri back, even from the bench, could be vital. As a result, I’m going for a draw, although United could nick it.

Sheffiled United vs Sheffield Wednesday will be televised live in the UK on Sky Sports Football with kick off at 19:45 GMT.

Odds and markets last updated on Friday 9th November @17:40 GMT. Keep checking back to see if there’s any updates to markets – the time stamp in the previous sentence for when we update tips on this page will be updated.