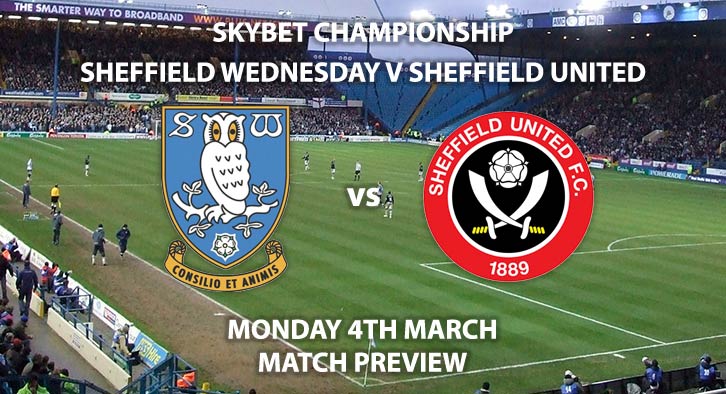 The Blades head into this game second in the table, ahead of this weekend’s action. With Leeds and Norwich both in action before United, they could drop to third place depending on results. Last time out, Chris Wilder’s men recorded an impressive 1-0 away at fellow promotion hopefuls West Brom. January recruit Gary Madine will be hoping to make an impact on his return to Hillsborough. The on-loan Cardiff striker was a huge part of the Wednesday side that pipped the Blades to promotion in 2011 but could end up lining up against them on Monday. The target man has two goals in seven appearances and has struck up a good partnership with top scorer Billy Sharp. The last two Steel City derbies have finished 0-0 at Bramall Lane however the fixture at S6 in September 2017 served up a cracker, with United winning 4-2 on that day.

Wednesday come into this fixture in their best form of the season. Steve Bruce is unbeaten since taking over in February, with three wins and three draws to his name. Back-to-back wins over Swansea City and Brentford have lifted the Owls to 12th, just six points behind the play-off places. Whilst a top six finish seems highly unlikely, their good form hasn’t gone unnoticed. It’s just one defeat in 11 league games since Mid-December and nine games at home without defeat. Steven Fletcher is enjoying his best goalscoring run in the side, with three in his last two games. Adam Reach is another in-form danger man for the Blades to keep an eye on. The winger has been involved in more Championship goals than any other midfielder since 2017/18, with 12 goals and 17 assists. His nine goals this season make him Wednesday’s joint-top scorer.

Peter Bankes is the referee for this fixture. The Englishman has officiated 36 top-flight matches this season. In that time, he has accumulated an average booking points total of 54.2. Therefore, I would advise a maximum of 70+ total points for this fixture.

This should be a cracking game between two in-form teams. United will be deserved favourites to win but Wednesday’s recent revival, particularly at home, will make it interesting. As a result, I’m plumping for a score draw.

Sheffield Wednesday vs Sheffield United will be televised live in the UK on Sky Sports Football with kick-off at 19:45 GMT.

Odds and markets last updated on Monday 4th March 2019 @13:50 GMT. Keep checking back to see if there’s any updates to markets – the time stamp in the previous sentence for when we update tips on this page will be updated.

Remember to keep visiting the tips and preview area for further updates and betting previews around this weeks European action featuring English teams.