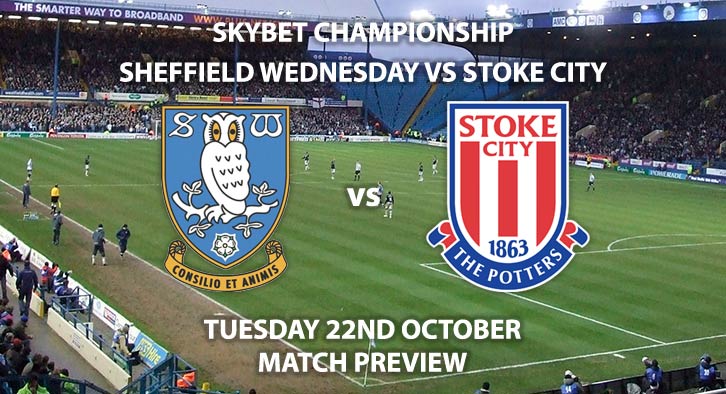 Sheffield Wednesday return to Hillsborough this week as they host Stoke City for some midweek Championship action on Tuesday night.

Wednesday will be keen to return to winning ways, following Friday nights draw away to Cardiff City; Gary Monk’s side thought they had done enough for all the three points, but Lee Tomlin’s late free kick ensured both sides left with a share of the spoils. A win for Wednesday would have given them top spot, so Cardiff’s late leveller would have been even tougher to take.

Their opponents Stoke on the other hand returned from the International break with a fantastic result, defeating promotion candidates Fulham 2-0 at the Bet 365 stadium. A victory which was celebrated emphatically by manager Nathan Jones at the final whistle, following questions over his position after the Potters disappointing run of form. Saturdays win signalled back to back wins for the first time this season for Stoke, but they still have work to do if they are to escape the relegation places.

A win for stoke (presuming other results go their way) would take them out of the relegation zone above Middlesbrough, which would be a welcomed sight for Potters fans, who have endured a difficult couple of years, and will be hoping relegation isn’t another realistic outcome for this season.

The referee for this fixture is Andrew Madley, brother of former Premier League Referee, Bobby. The 36-year old has officiated in both the Premier League and Championship this season, where in five matches has accumulated a total of seventeen yellow cards, and one red card. This considered, I would recommend a maximum of 40+ booking points for this fixture. Madley is yet to officiate Wednesday this season but did take charge of Stoke’s 3-2 home defeat to Nottingham Forest, where he issued four yellow cards that night.

This match will be broadcast live on Sky Sports Action with kick-off scheduled to take place at 19:45 BST.