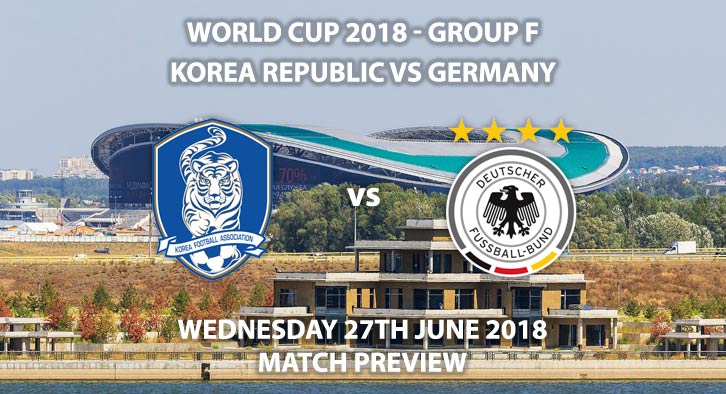 It is do or die for Germany. Die Mannschaft have been at the epicentre of dram at every turn so far in Russia. Mexico royally threw a spanner in the works with a wonderful performance in a 1-0 victory against the holders in the group’s first match, before Toni Kroos rescued the Germans with a magnificent injury-time goal to steal a 2-1 win against Sweden last time out.

Bizarrely, that was just Germany’s second win in their last eight fixtures too, the other coming against Saudi Arabia (2-1).

Kroos’ goal very much felt like it could be one of huge significance in this tournament. Joachim Low will certainly hope so, although there is still plenty to address in his side. The defence looks fragile, resulting in Jerome Boateng’s rash and eventually deserved red card against Sweden. The midfield looks lethargic and overrun. In attacking areas chances are being created but they are even more frequently being squandered.

One would still be bold to write off Germany, however. There is depth, experience and quality throughout the entire squad. It could also be potentially ideal to be playing against South Korea who have nothing to play for. For 2010 Golden Boot winner Thomas Muller to score and Germany to win 2-0 or 3-1 is 18/1 with SkyBet. That is a very alluring Scorecast Boost.

Losing 1-0 to Sweden, then 2-1 to Mexico, Shin Tae-Yung’s side having nothing to play for in terms of qualification. However, this could be a poisoned chalice. The shackles may come off, especially with a vulnerable German side in front of them. Motivation should never be a factor when facing the World Champions. The prize in itself is beating the best team in the world.

Whilst perhaps unfortunate against Sweden, there is no denying that Mexico were dominant against South Korea. Even still, The Reds created opportunities in both matches and are no slouches. Son Heung-min’s wonderful strike to make it 2-1 against Mexico proves that the quality is there. The Spurs attacker to score at anytime is a boosted 4/1 with SkyBet, but Timo Werner at the same price seems like smarter money.

A point of note though is that Germany haven’t kept a clean sheet in their last seven games. Should that continue, it would surely be Son who is the player to capitalise. Both teams to score and Germany to win is 13/8 with SkyBet.

This Germany side could be there for the taking. If we have learned anything about Germany though, is that they always tend to pull through. There is too much at stake and too much quality on the pitch not to.

South Korea vs Germany will be televised live in the UK on BBC 1 with kick-off at 15:00 GMT.

Tips updated at 17:40 GMT on 26th June 2018. Markets unlikely be updated again prior to the game kicking off.