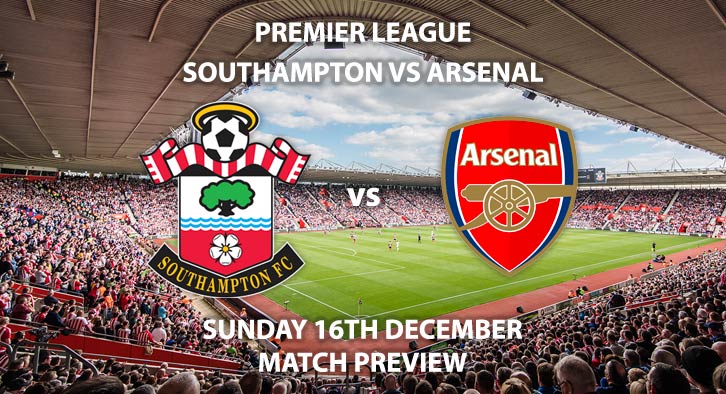 Southampton vs Arsenal- the hosts have had a dire season so far as they currently sit 19thin the Premier League. Meanwhile, Arsenal will hope to carry on their huge unbeaten run that hasn’t seen them lose since August.

Southampton are priced at (link no longer available) to win by BET365. The Saints have been in poor form to say the least, with no win in 12 matches. They are the only club without a home win all season and this Arsenal side look likely to continue that statistic. Going forward they have shown little to no creativity. Danny Ings is their highest scorer with four goals. He is (link no longer available) to score first.

Defensively they have been one of the worst in the league. They have conceded 30 goals from 16 matches. However, only 10 of those goals have been at home. It seems very unlikely they will keep a clean sheet. For Southampton to win and over 3.5 goals in the match, SkyBet are offering 17/2.

Arsenal are priced at (link no longer available) to continue their unbeaten run with a win. Their previous win against Huddersfield was a tight one, with Lucas Torriera scoring late on. They are fortunate to have goal scorers all over the pitch, however it is Pierre-Emerick Aubameyang who has stolen the headlines. The striker has ten goals this season and has been the spearhead of Unai Emery’s attack. He is price boosted to 9/2 to score first with SkyBet.

One incredible stat shows that Arsenal are yet to be winning a match at half-time all season. It seems that record is going to be broken soon, and when better against this out of form Southampton side. Arsenal are priced at 11/8 to be winning at half time.

The referee for this match will be Chris Kavanagh. The official has averaged 33.5 booking points in his 10 Premier League matches.

Southampton vs Arsenal will be televised live in the UK on Sky Sports Premier League with kick-off at 13:30 GMT.

The visitors have too many on form goal scorers and attackers to not win this comfortably.

Odds and markets last updated on Sunday 15th December @10:00 GMT. Keep checking back to see if there’s any updates to markets – the time stamp in the previous sentence for when we update tips on this page will be updated.

Remember to keep visiting the tips and preview area for further updates and betting previews around today’s big game between Liverpool and Manchester United.