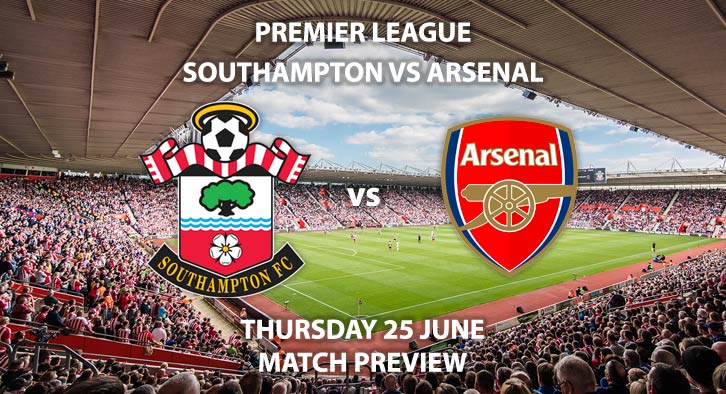 The Saints returned to the pitch with a resounding 3-0 victory over Norwich, to make some good on their poor form before the enforced break. Meanwhile, Arsenal have suffered defeats against Manchester City and Brighton as their injury crisis continues.

Southampton and every so slightly favoured by the bookmakers and are priced at 6/4 to win the match by SkyBet. The Saints all but secured their Premier League safety as they beat Norwich on the weekend and can continue to climb up the table with a win. However, they have the worst home record in the league with just four wins with nine losses at St Mary’s Stadium.

In attack, Danny Ings has hit new heights in Ralph Hassenhuttl’s side with 16 goals this season. He is priced at 1/1 to score anytime.

Arsenal are priced at 13/8 to win the match and claim a vital away win as they hope to turn their recent form around. The Gunners have had a torrid return from the coronavirus pandemic with injuries to key players stacking up against them. Their away record doesn’t make for much better reading as they are winless in seven matches on the road. Whilst they do boast the more talented players, it’s hard to see them pulling off a show-stopping performance.

Going forward, Pierre-Emerick Aubameyang will be their best hope of scoring and he is priced at 23/20 to score anytime.

Last time these two met, they fought out a 2-2 draw that had plenty of drama and fireworks. A late second goal from Alexandre Lacazette could only salvage a point from Danny Ings and James Ward-Prowse’s strikes as 80 booking points were brandished. SkyBet are offering 11/10 for 40+ booking points.

The match will be televised on Sky Sports Main Event HD and kicks off at 18:00.

– Whilst Arsenal have the stronger squad on paper, their recent performances have been dire.