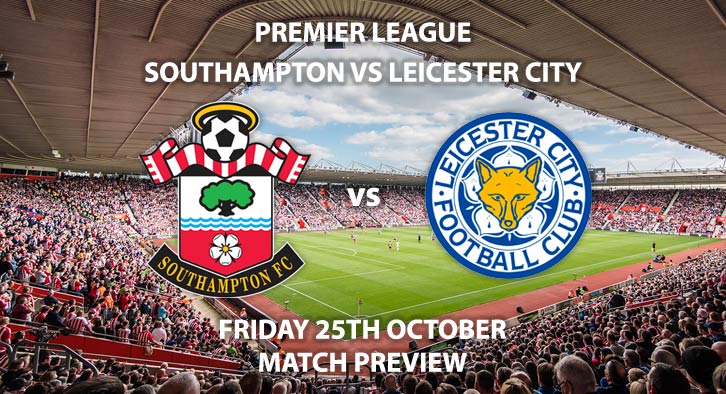 The Saints have endured a pretty poor start to their league campaign and sit 17th in the standings. From nine matches, they have just eight points. Meanwhile, Leicester City have been the polar opposite with 17 points and are currently 3rd in the league. They are making a real statement of intent for Champions League qualification.

Southampton are priced at 2/1 to win the match by SkyBet. In their previous outing, the hosts managed a 1-1 draw with Wolves away from home – with VAR stealing the headlines. They are struggling for much attacking prowess and have averaged one goal a game so far. Danny Ings scored last weekend and has been a threat since the start of the season and could have scored more than his four goals. He is 6/4 to score anytime.

If the Saints can pull off an impressive victory, it will still be likely their visitors will find the back of the net. Southampton are 9/2 to win and both teams to score.

Leicester City are priced at a very tempting 13/10 to win on Friday night. The Foxes have been in inspired form this season under Brendan Rodgers. They have an extremely balanced squad and striker Jamie Vardy is showing age is just a number. The retired international has six Premier League goals so far and is price boosted to 7/1 to score a brace.

Three of the Foxes four previous victories have all come as a 2-1 score line. This demonstrates their character to get results over the line, even if the performance has not been perfect. SkyBet are offering 17/2 for the same score line in the visitor’s favour.

The referee for this match will be Andre Marriner. The official has been one of the most lenient in the top-flight this season. He has averaged just 22 booking points per match. SkyBet are offering 6/4 for Under 30 booking points.

Southampton vs Leicester City will kick-off live on Sky Sports Main Event at 20:00 BST in the UK .

– The Foxes are in red hot form and should have no troubles scoring past the leaky Saints defence.