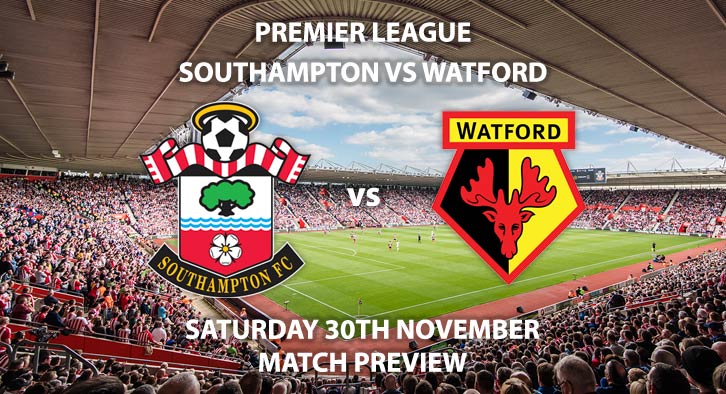 Southampton return to St Mary’s this weekend as they host fellow strugglers Watford in the Premier League on Saturday evening.

It’s a clash between the Premier Leagues bottom two sides, and a win for either side will be enough to lift them out of the relegation zone, if other results go in their favour.

Southampton have struggled to get points on the board this season and sit a point and a place above Watford in 19th. Despite their troubles, the Saints have delivered a number of promising showings in recent weeks, most notably last Saturday where they took a point from the Emirates. Ralph Hasenhuttl’s side drew 2-2 with the Gunners but conceded deep into stoppage time courtesy of Alexander Lacazette’s late strike. Southampton have won two games in the league all season and will be hoping to take that tally to three come Saturday evening.

The Hornets are bottom of the pile and have won once all season. It took them twelve matches to register their first league win, which came against fellow strugglers Norwich. Watford failed to build on their much-needed win against the Canaries and were beaten 3-0 at home by Burnley in the last set of Premier League fixtures.

Last season there was nothing to separate these two sides, as they played out 1-1 draws both home and away to one another. The last win for either of these sides in the Premier league was in the 2017/18 season, where Watford ran out 2-0 winners at St Marys. Before that, Watford hadn’t won in a league match against Southampton since the 2008/09 season, when both sides were in the Championship. The Saints will be hoping their strong run against Watford continues and stretches beyond this weekend’s fixture.

The referee for this clash is Michael Oliver. The 34-year old has taken charge of twelve Premier League matches so far this campaign, accumulating a total of thirty-nine yellow cards in these matches, which works out at an average of just over three per game. This considered, I would recommend a minimum of 20+ booking points for this fixture. Oliver is yet to officiate a Premier League match concerning these two sides this season.

This match will be shown live on Sky Sports Premier League, with kick off scheduled to take place at 17:30 BST on Saturday evening.