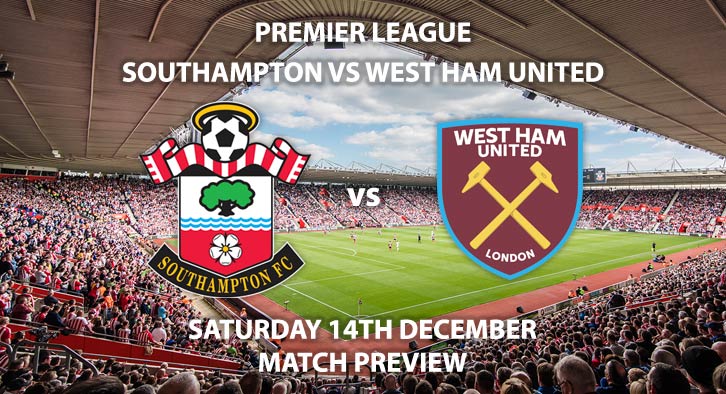 Southampton return to St Mary’s this weekend as they welcome West Ham in the Premier League on Saturday evening.

Ralph Hasenhuttl’s side will be keen to get points on the board following their disappointing defeat to Newcastle last weekend. The Saints led that game, but were undone by goals from Jonjo Shelley, and Federico Fernandez late on.

West Ham will too be looking for a more positive result this week, as they were defeated 3-1 at home by Arsenal on Monday evening. The Hammers’ were themselves guilty of squandering a lead. Their nine-minute capitulation which saw them concede three goals was a disappointment for all concerned.

We may not be at Christmas yet, but this affair could have a meaningful say in the race to stay in the Premier League. Both sides find themselves anxiously looking over their shoulder. Southampton are 18th, meanwhile West Ham are two places better off in 16th. A win for either will be a welcomed boost.

Despite Southampton’s position, their form in the last few weeks has been a positive. The Saints have picked up seven points out of a possible twelve in their last four matches, which include the draw away to Arsenal, and back to back wins against Watford and Norwich.

West Ham on the other hand have lost five of their last six, which has piled the pressure on boss Mauricio Pellegrini. They have won once in the league since September, and that came at the end of November against Chelsea at Stamford Bridge.

The last time these two sides met produced a convincing 3-0 win for West Ham at the London Stadium. In fact, its West Ham who have the better recent form between the two and have won the last three meetings. Southampton’s last win against West Ham came in August of 2017, where they ran out 3-2 winners at St Marys.

The referee for this fixture is Martin Atkinson. The 48-year old has taken charge of fifteen matches this season and has awarded forty-one yellow cards and two red cards. Saturdays encounter will be the first time this season Atkinson has overseen a match involving these two sides this season.

This match will be shown live on Sky Sports Premier League, with kick-off scheduled for 17:30 GMT on Saturday evening.