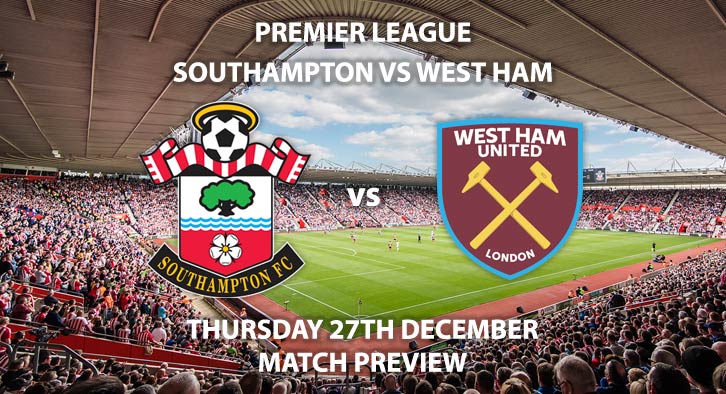 Southampton and West Ham will both be looking to give their fans a late Christmas present as the two face off in Premier League action this Thursday.

The hosts enter the match on a two-game win streak with victories over Huddersfield and Arsenal. Meanwhile, West Ham had their four-match win streak undone in their last outing. They lost 2-0 at home to Watford.

Southampton are priced at 6/5 by SkyBet to win this match. The Saints have climbed out of the drop zone with their previous two outings. They now have 15 points from 18 matches. Striker Danny Ings has scored three in their last two and has seven for the season. He is lethal from the penalty spot and is (link no longer available) to score anytime with BET365.

The last three meetings between these two sides have seen at least three goals. The last match at the St Marys Stadium saw the home side win 3-2. SkyBet are offering 3/1 for Southampton to win and both teams to score.

West Ham are priced at 21/10 to win this match. They have been in red hot form in the past few weeks however enter the match on the back of their first loss in five matches. Summer signing Felipe Anderson is beginning to find his feet in London and has got six goals in the campaign. The tricky Brazilian is likely to cause the home side problems and is 17/2 to score first.

West Ham’s away return has been decent, with 11 points taken from eight matches. They have also kept two clean sheets in their last two away matches and are 5/1 to win to nil.

The referee for this match will be Craig Pawson. The official hasn’t been shy with his cards this season and has averaged 48.8 booking points this season in his 12 Premier League appearances.

Southampton vs West Ham United will be televised live in the UK on Sky Sports Premier League HD and kicks off at 19:45.

Tough match to split. Both teams capable of scoring.