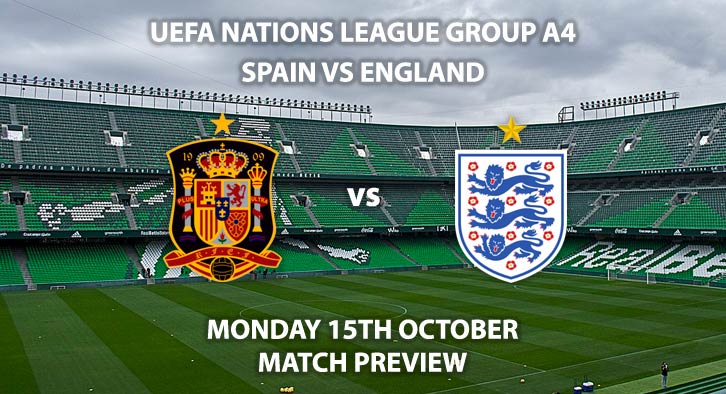 Spain vs England: England take on Spain in the UEFA Nations League looking to secure their first win in Group 4A and avenge their defeat Wembley last month.

Spain claimed a 2-1 win at Wembley, with goals from Saul Niguez and Rodrigo Moreno cancelling out Marcus Rashford’s early strike. England secured their first point in Group 4A on Friday when they drew 0-0 with Croatia in a behind-closed-doors fixture. Gareth Southgate opted for a back four against the beaten World Cup finalist. Kyle Walker was restored to the lineup after Kieran Trippier was preferred against Spain. On the wings, Rashford and Raheem Sterling started in support of Harry Kane. Whilst it was an even contest, England created the more clear-cut chances, with Kane hitting the bar with a header, whilst Rashford should have scored but could only hit a weak effort straight at the goalkeeper.

Jadon Sancho was given his debut by Southgate, as he replaced Sterling with 15 minutes to play. The Borussia Dortmund gave Three Lions’ supporters an early indication of what he’s all about, with a bursting drive down the wing, moment after entering the play. Fellow youngsters Mason Mount and James Maddison will be hoping for their first cap on Monday.

Spain beat Wales 4-1 on Thursday night in an international friendly. Dortmund striker Paco Alcacer grabbed a brace, before Sergio Ramos and Marc Bartra added to the scoreline against Ryan Giggs’ side. Luis Enrique has already shown a commitment to bringing through the next generation of Spanish talent. Against Wales, they started with a midfield trio of Saul, Rodri Hernandez and Dani Cabellos, who have a combined age of 67. Alvaro Morata was also reintroduced into the fray, although Enrique may opt to start with Rodrigo or Alcacer against England.

Szymon Marciniak is the referee for this game. The Polish official has already taken charge of two European games this season, as well as the Super Cup in August. In 82 matches, he has issued 4.15 cards per game. As a result, I would advise a maximum of 50+ total points for this fixture.

England were competitive against Spain last month, and but for the referee’s controversial decision to rule out Danny Welbeck’s late equaliser, would have drawn the game. This time around, they are without Dele Alli and Jese Lingard, which makes the task tougher. Therefore, I’m going to go for a narrow Spain victory.

Spain vs England will be televised live in the UK this evening on Sky Sports Main Event with kick off at 19:45 GMT.

Keep visiting the tips and preview area for further updates and betting previews towards the end of the week with the return of domestic fixtures.