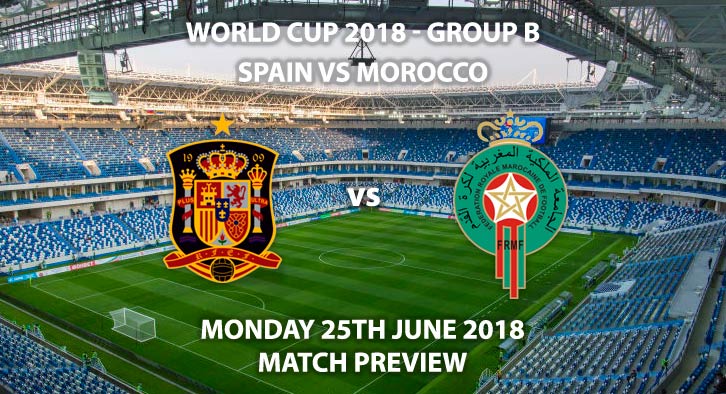 Spain vs Morocco. Spain need just a point to progress through to the last 16 of the World Cup, when they face already-eliminated Morocco.

Spain’s fortunate 1-0 win over Iran moved them joint-top of Group B with Portugal. Despite winning and dominating the match, Iran had chances to snatch an equaliser, which would have left Spain in trouble. They performed well and kept the ball magnificently, especially in the first-half, however, you can’t help but feel teams will be able to score goals against them. Isco again put in a man-of-the-match display after impressing again Portugal. Costa, meanwhile, grabbed his third goal of the tournament, albeit in fortunate fashion. Spain seem to have found a way to get the best out of him; he at 5/1(Skybet) for the golden boot, which represents good value.

If the Spain and Portugal both win by the same scoreline in their final group game and have an equal Fair Play Conduct, the winner of the group will be dictated by drawing names out of a hat – for the first time in World Cup history. However, Spain’s job is far from done as they could still exit the competition with a defeat.

Morocco may go down as one the best sides in World Cup history to finish with 0 points. They created a bundle of chances against Portugal and deserved at least a point. However, as was the case against Iran, they failed to take those chances and lost the game. They have some talented players, particularly in midfield, but lack a true number nine. That has been their downfall this summer and why they’re yet to score. Against Spain, they will hope to restore some pride and maybe get on the scoresheet. This will undoubtedly the toughest test they have faced yet, but Spain offers a good opportunity for them to claim a major scalp.

Ravshan Irmatov is the referee for this game. He has averaged 3.45 yellow and 0.23 red cards in 165 international matches. Therefore, I would advise a maximum of 40+ match booking points.

Spain have to win this game to ensure they top the group. Anything less and they could end up in second, behind Portugal. When Spain have to win, they usually do. I fancy them to get a result again Morocco, who for all their nice build-up play, lack any real bite in front of goal.

Spain vs Morocco will be televised live in the UK on BBC 1 with kick-off at 19:00 GMT.