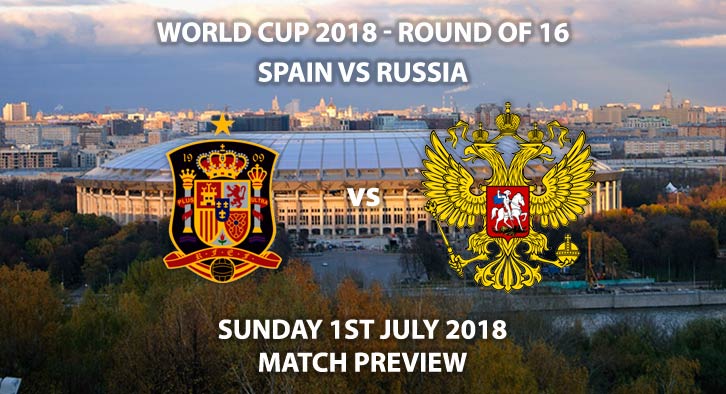 Spain vs Russia – Spain take on hosts Russia in the first knockout round with both sides desperate to move into the last eight of the World Cup.

Spain topped Group B after a 90th-minute equaliser from Iago Aspas preserved their unbeaten start to the World Cup. They looked on course for a shock defeat against bottom side Morocco before the Celta Vigo forward back-heeled them level. Spain have struggled defensively in this tournament, conceding five goals in the Group Stages. Despite having one of the most coveted backlines and ‘keepers in the tournament, Spain have shown they can be got at.

They struggled to handle the pace and power of Cristiano Ronaldo in their opening match against Portugal, which could cause concern as they enter the latter stages of the tournament. In attack, Isco continued his fine start in Russia by adding his first goal whilst Diego Costa continued to torment after three goals in his first two games.

Russia came crashing back down to earth with a thump following their 3-0 defeat to Uruguay. That result left them second in Group A, despite winning their first two games. Russia manager Stanislav Chercesov made a number of changes, resting key players, and his side’s task was made even tougher as they went down to ten men in the first half. As a result, second choice right-back Igor Smolnikov will miss this match through suspension. This is the first game we have seen Russia struggle in, in what could be argued as their first real test. Although they did make changes, I think this was a sign that they will struggle against the bigger nations. They do possess plenty of pace and hard-working midfielders though and will play on the counter-attack to try and expose Spain.

Bjorn Kuipers is the referee for this game. The Ducthman plies his trade is the Eridevisie where he has averaged 4.33 cards per game across 15 league games. Therefore, I would advise a maximum total of 40+ booking points for this game.

Spain have proven they are capable of being beaten. They got out of jail against Morocco, but still topped their group. Russia struggled against Uruguay in their first major challenge. I’m not sure they will have the mentality needed to topple Spain. Their players may freeze on the big stage, with the weight of the country on their shoulders. As a result, I’m plumping for a Spain win.

Spain vs Russia will be televised live in the UK on BBC 1 with kick off at 15:00 GMT.

Don’t forget – we will be previewing as many if not all the FIFA 2018 World Cup Group Stage games. Keep visiting Tips and Previews ahead of games to get our suggested tips and correct score picks for the games.Tips updated at 10:35 GMT on 1st July 2018. Markets will not be updated again prior to the game kicking off.