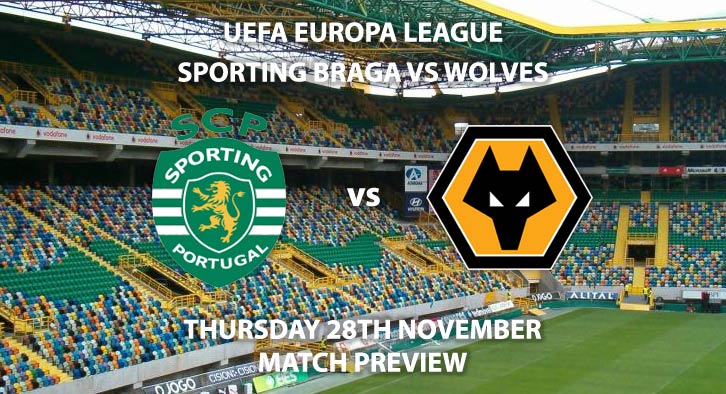 Wolverhampton Wanderers look to secure passage to the Europa League knockout stages when they travel to Sporting Braga on Thursday evening.

They face a Sporting Braga side, who too know that a win will confirm their qualification for the next round. It’s a top of the table clash in group K, with Braga leading the way, with Wolves in second.

In Portugal’s Primeira Liga Braga are currently 9th, but have shown consistency over the last batch of games. Ricardo Sa Pinto’s side have lost only one of their last six league affairs, which is a good return following their slow start to the season, where they won only one of their opening five.

Nuno Espirito Santo’s Wolves side have won their last three group matches, but did suffer defeat on matchday one, to Thursday nights opponents Braga. Since defeat Wolves have taken maximum points, and conceded only once, keeping two clean sheets. It’s a welcome turnaround at Molineux both in the Premier League and Europe, following Wolves sluggish start to their 2019/20 campaign.

But a win on Thursday night will ensure a safe passage to the knockout phase, with a game to spare

Braga’s 1-0 victory at Molineux back in September was the only time on record that these two sides have met in a European competition.

The referee for this encounter is Aleksey Kulbakov. The 39-year old from Belarus has taken charge of only three matches so far this season, accumulating a total of twelve yellow cards, average four per match. Kulbakov took charge of PSV’s 3-0 triumph over Apollon Limassol, where he awarded three yellow cards.

This match will be shown live on BT Sport 2 with kick-off scheduled to take place at 17:55 BST.