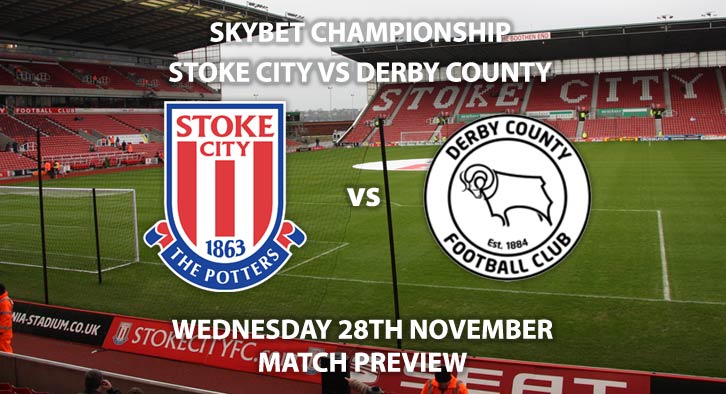 Stoke are still struggling to climb up the table despite the strength of their squad. Meanwhile, Derby are also trying to find some consistency to put pressure on the top two.

Stoke are priced at 11/8 to win this Wednesday evening. The Potters have become a frustrated outfit so far with four draws in their last five matches. The odds on yet another draw in this match are 23/10. They have not been the most exciting team to watch either with seven of their last eight matches having under 2.5 goals. The odds on another under 2.5 goals match is 8/11.

Going forward, Stoke will be hoping Benik Afobe can add to his tally this week. The striker is currently on 4 goals and two assists for the season and is 4/1 to score first. Gary Rowett’s side have taken a while to warm up in matches, with four of their last six goals coming after the hour mark. SkyBet are offering 11/10 for more goals to be scored in the second half.

Derby are priced at a tempting 2/1 to get three points away from home. The Rams will be looking to make it two back to back wins as they continue to put pressure on the top spots. Jack Marriot has been the shining star in Lampard’s squad and has scored six goals in his previous eight games. The Striker is 7/4 to score anytime.

Despite their impressive attacking efforts with 27 goals in 18 matches, their defence has not been up to the same standard – especially on the road. With 21 goals conceded this season and no clean sheet away from home this season, I’d say backing both teams to score would be a clever bet. For Derby to win and both teams to find the net, you can get odds of 11/2.

The referee for this match will be Darren England. The official has averaged 38.6 booking points in his 11 Championship matches.

Stoke City vs Derby County will be televised on Sky Sports Football HD and kicks off at 19:45.

– Both sides seem to cancel each other out but with form, you have to tip the visitors.

Odds and markets last updated on Wednesday 28th November @18:27 GMT. Keep checking back to see if there’s any updates to markets – the time stamp in the previous sentence for when we update tips on this page will be updated.