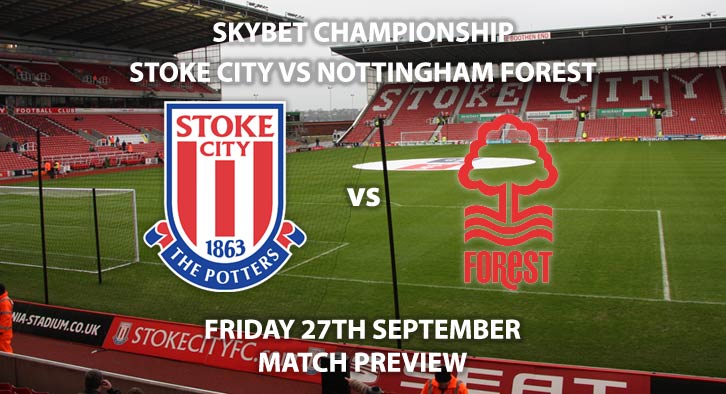 Stoke City are still searching for their first win of the season as they host Nottingham Forest at the Bet 365 stadium this Friday evening.

The Potters head into the Friday night fixture with two points from their last eight games, currently sitting second from bottom in the Sky Bet Championship table and are winless in their last 14 games. Nathan Jones side are just one of two sides without a victory in the league so far this season.

Their poor form continued with a midweek defeat in the Carabao Cup at League Two side Crawley, being beaten on penalties after a 1-1 draw. Nathan Jones will be disappointed with the midweek defeat, as a number of first team regulars were selected, meaning they will return to action this weekend rested and re-energised for their latest test.

Their opponents Nottingham Forest were thrashed 5-0 in the Carabao Cup in midweek, at Arsenal. However, their Championship form has been impressive having enjoyed a strong start to the season, currently sit 6th in the SkyBet Championship. Forest have the momentum going into the club as they are unbeaten in their last five away league games so far this season. A win for Sabri Lamouchi side will take them top of the table.

The last two meetings between these two sides favours Stoke City, who have the sociological advantage going into tonight’s game with a 2-0 victory last time out. Stoke are unbeaten in six home games against Nottingham Forest in all competitions.

The man in the middle of the field for tonight game is Andy Madley as he takes charge of his fourth match of the season. Madley has shown nine yellow cards and one red card in his three games so far this season and therefore 30 bookings points is probably a fair margin to go for.

Considering the contrasting recent form of these two sides, I can see nothing other than an away win. If Stoke City are to climb up the table then these are the matches they will need to get points from. Nathan Jones is under serious pressure and is in need of a result. I see Forest winning in comfortable fashion.

This match will be shown live on Sky Sports Premier Football, with kick off scheduled to take place at 20:00 BST.