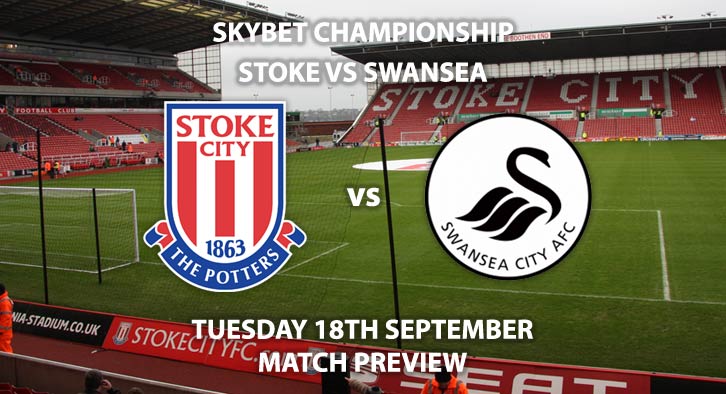 Stoke City vs Swansea City – both sides are still adapting to life in the new league after both getting relegated at the end of last season. The hosts have struggled to settle with one win in their opening seven matches. Meanwhile, the visitors are in the play-off places and seem to be enjoying Championship life a little more.

Stoke are favourites for this match despite their poor form. SkyBet have priced them at 17/20 to win, however their recent showings make this market a questionable one to back. Striker Benik Afobe has been the only bright spark so far for The Potters. The 25-year-old has four league goals to his name and is priced at 4/1 to break the deadlock.

Both scoring goals and keeping them out has been an issue for Gary Rowett’s side so far. They blew a 2-0 lead over the weekend against a Sheffield Wednesday side that has been uninspiring of late. For Stoke to win to nil is priced at 2/1.

Swansea are the outsiders for this match and are priced at 7/2. Great odds to be part of an accumulator. With just one loss in their first seven matches, Graham Potter’s side will enter this match with a fair amount of confidence. Oli McBurnie has been in delightful form this season, with four goals to his name. The Scottish international has the habit for being in the right place, at the right time. SkyBet have priced him at 9/4 to score anytime.

Swansea have stood strong in defence with only five goals conceded from seven matches. However, Stoke have already bagged nine goals and possess some clear attacking potency. Swansea to win and both teams to score is 8/1 – cracking odds.

Both teams have scored in each in each of their last five matches head to head at the Bet365 Stadium.

The referee for this match is unannounced however I would expect a few cards for each team as both need crucial midweek points.

Stoke City vs Swansea City will be televised on Sky Sports Football and kicks off at 20:00 GMT.

– Swansea’s attacking prowess has been impressive and maybe a little too much for Stoke to deal with.

Odds and markets last updated on Tuesday 18th September @17:42 GMT. Keep checking back to see if there’s any updates to markets – the time stamp in the previous sentence for when we update tips on this page will be updated.