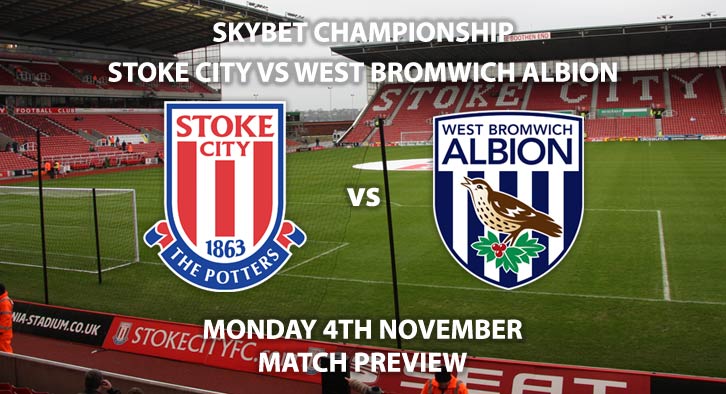 Stoke return to the Bet 365 stadium as they welcome league leaders West Brom on Monday evening in the Championship.

Stoke are once again on the search for a new manager, following the dismissal of boss Nathan Jones on Friday morning. City’s next managerial appointment will be their third since 2018.

The Potters have endured a torrid beginning to this seasons campaign, and find themselves 23rd , with only two wins all season. Last time. Round they were defeated 2-0 away to Millwall, a match where the familiar face of former Manager Gary Rowett was in the opposing dugout, his first match in charge of the Lions.

The current form of Monday evenings opponents couldn’t be more of a contrast. Albion currently sit top of the pile in the Championship, and have lost only once all season. They were held at home in the last round of fixtures by Lee Bowyer’s Charlton, who came away with a point courtesy of a last-minute penalty. Slaven Bilic’s side however are without a win in their last two, drawing both 2-2.

Despite Albion’s success so far this season, there has been an underlying issue; their ability to keep clean sheets. They have only done so twice in the league this season, and have conceded the most goals in the top 5 (17).

West Bromwich will be hoping for a repeat of last season’s dominance over their Midland’s rivals, where they completed a league double. Albion have lost once in their last nine against the potters, with their last defeat coming in 2017. Stoke’s only win prior came in 2014, where this fixture was a Premier League encounter.

In the last meeting between these two sides West Bromwich ran out 1-0 winners, and will be expecting a similar outcome on Monday evening.

The referee for Monday’s clash is Tim Robinson. The Englishman has taken charge of ten matches across all competitions so far this season, accumulating a total of thirty-two yellow cards and one red. This considered, I would suggest a minimum of 30+ booking points for this fixture. Robinson has overseen matches concerning these two this season. He took charge of Stokes 2-2 home draw with Derby County where he awarded six yellow cards, and West Brom’s 4-2 win over Huddersfield, where not a single card was brandished.

Stoke City vs West Bromwich Albion will be broadcast live on Sky Sports Football, with kick-off scheduled for 20:00 GMT on Monday Evening.