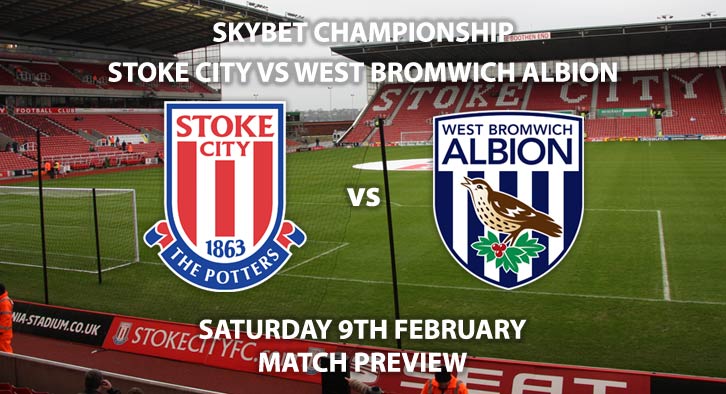 Stoke City vs West Bromwich Albioin: the visitors will be hoping to bounce back from defeat against Middlesbrough by closing the gap on the top two with a win against Stoke City.

The Baggies suffered a blow in their bid for automatic promotion after a 3-2 defeat at the Hawthorns last weekend. Despite leading the game 2-1, a Britt Assombalonga ensured former boss Tony Pulis came away with three points. That result has left Darren Moore’s side in fourth, seven points behind the top two, but with a game in hand. West Brom’s Achilles heel is evident – they have conceded the most goals out of any side in the top eight. Individual errors have proved costly, with two of Boro’s three goals coming from avoidable mistakes. Whilst they may have the best strike force in the division – Dwight Gayle and Jay Rodriguez were both target on Saturday – if they can’t keep clean sheets, they won’t go up automatically. With the gap at seven points – potentially four – the Baggies need to bounce back at Stoke, to ensure the gap doesn’t widen further.

Stoke have had a mixed start to life under Nathan Jones. It’s clear nothing is expected of this campaign despite their being 16 games left. The new boss has experimented with a back three in recent weeks, with varying degrees of success. Stoke are this season’s underachievers, haven’t been odds-on favourites to win the league in August. They’re now 15th, nine points off the play-offs. They have won one of their last nine in all competitions, which came at home to Leeds. Between now and the end of the campaign, Jones will be assessing his squad, to decide who to keep in the summer. That means the squad are playing for their futures, which should bring some fight from them.

Jeremy Simpson is the referee for this fixture. The Englishman has officiated 15 second-tier matches this season. In that time, he has accumulated an average booking points total of 38.7. Therefore, I would advise a maximum of 50+ total points for this fixture.

If West Brom are serious about the top two, these are the sort of games they must win. Stoke are out of form and the Baggies have won four of their last five away games, however, so I’m backing the visitors for all three points.

Stoke City vs West Bromwich Albion will be televised live in the UK on Sky Sports Football with kick off at 17:30 GMT.

Odds and markets last updated on Saturday 9th February @16:47 GMT. Keep checking back to see if there’s any updates to markets – the time stamp in the previous sentence for when we update tips on this page will be updated.