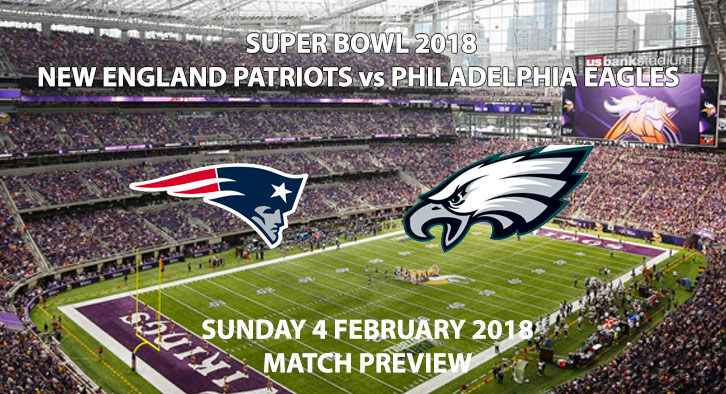 In the biggest game of the year it’s time for the Super Bowl 2018 Prediction between the New England Patriots and the Philadelphia Eagles!

The Eagles who finished number 1 in the NFC have gone from a presumed Super Bowl participant earlier this year, to big playoff underdog because of quarterback Carson Wentz’s injury, which turned the team over to QB Nick Foles. New England enters Super Bowl 52 as the favorite to repeat, with hall of fame QB Tom Brady building off an unprecedented comeback in Super Bowl 51 to have one of his best seasons, even at age 40.

Brady averaged 47 pass attempts per playoff game last year. This year, he’s averaged more than 45. The Patriots are comfortable with him dropping back that many times again, as the Eagles, even with their strong offensive front four, were tied for only 15th in sacks this season.

The Patriots are going for their sixth Super Bowl ring and have plenty of guys who have gone through winning a championships. Two of them now play for the Eagles, Blount and Long. The Eagles embraced their underdog status in the NFC playoffs, and the disrespect card will be played in their favor again. When it comes to coaching the Eagles are at a disadvantage as the Pats are coming in with arguably the greatest coach of all time.

I was wrong with both picks last win with upsets on both sides, in the biggest game of the season it’s easy to often times go with experience after all. For experience runs hand and hand with history and in this rematch in Super Bowl 52 I see the same result from Super Bowl 39. This game has the feel of a back-and-forth affair with neither team starting slow. It probably comes down the last possession, and Brady will need only one final minute to push the Patriots to victory and the first Super Bowl repeat since they beat the Eagles in Super Bowl 39.

The Super Bowl will be televised in the UK on Sky Sports and BBC 1.

Prediction: – I have the Patriots winning 30-27

Keep checking back next season for more NFL betting tips in our tips and previews area.