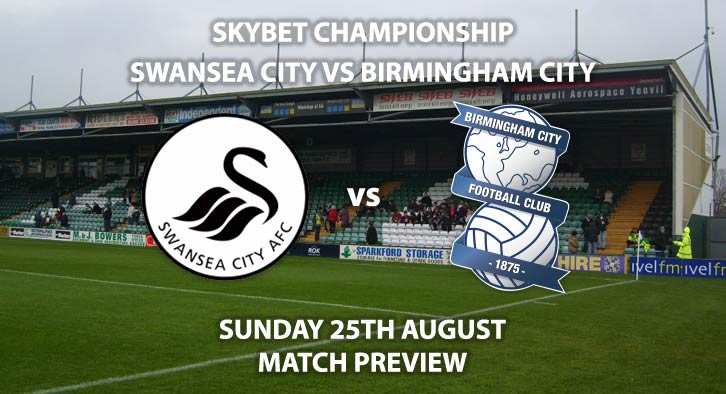 Swansea City will want to continue their fine start to the new Championship season on Sunday when they host Birmingham City.

The Swans have taken like a duck to water to life under Steve Cooper who has led his new side to ten points from their opening four games. They took six points in four days last week beating Preston North End 3-2 and then Queens Park Rangers 3-1 away in midweek. That was the first time they have scored three goals in three consecutive fixtures for 20 years. They sit second in the table ahead of this weekend’s action and are one of only four teams left unbeaten in the Championship.

A huge part of Cooper’s success has been to bring Borja Baston and Andre Ayew in for the cold. Combined, they cost £35m in the Premier League, but following relegation, they were both shipped out on loan. With Oliver McBurnie sold to Sheffield United, Cooper has played Baston and he has rewarded him with four goals in as many games. Similarly, Ayew is finding his feet and set up the Swans’ third goal at QPR on Wednesday. At this level, the forgotten pair will be a match for any side at this level.

Birmingham have started the season with five points from their opening four games. They’re unbeaten at home, turning over Barnsley 2-0 in midweek, but got trounced at 3-0 at Nottingham Forest on their last away visit. That’s a theme I’m expecting a lot from Pep Clotet’s side, strong at home, poor away. Although they did win away at Brentford on the opening day of the season, it was very much a smash-and-grab result.

Lukas Jutkiewicz was back in the scoring grove on Wednesday, alongside new signing Alvaro Giminez in attack. The big target man is crucial to their play but needs to be in a two-pronged attack to be most effective. Last season, Garry Monk deployed a 4-4-2 with Che Adams and Jutkiewicz in attack and they devastated. Collet played a 3-5-2 in midweek, which got the best from him, unlike the 4-3-3 deployed at Nottingham Forest.

Andy Woolmer is the referee for this match. The Englishman racked up an average booking points total of 31.3, across 19 Championship matches last season. With that in mind, I would recommend a maximum of 60+ booking points for this fixture.

Swansea have really impressed me with their start to the season. Equally, Birmingham are shaping up to be a side that are good at home but struggle away. As a result, I’m going for a home win.

Swansea City vs Birmingham City will be televised live in the UK on Sky Sports Football with kick-off at 12:00 BST.