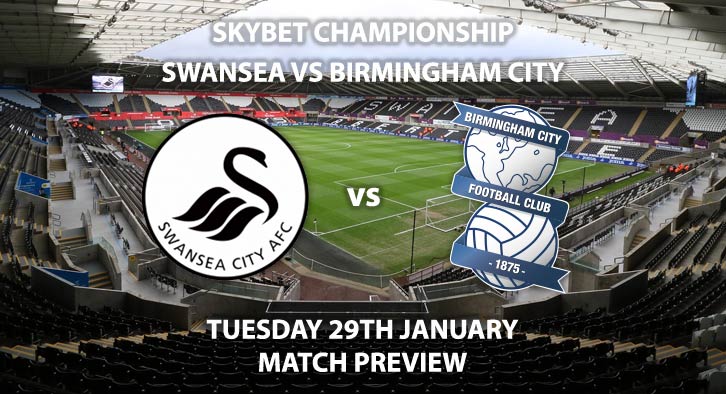 Garry Monk will manage once again against his former side, who he managed a 0-0 draw with earlier in the season. There is just one point separating the two sides who are both looking to apply pressure on the top six.

Swansea City are slight favourites for this bout and are priced at 11/10 to win the match. Graham Potter’s side will be happy with the progress made this season with many personnel changes over the summer. No player has shone more in his side than striker Oliver McBurnie. The young Scot is in hot scoring form with 5 goals in his last 3 matches in all competitions. He has 11 goals in the league and is 4/1 to score first on Tuesday.

The Swans have scored a total of 13 goals in their last five matches and conceded just four. They are 5/2 to win to nil.

Birmingham are priced at 13/5 to win the match and leapfrog their opponents in the league standings. Garry Monk’s side have been a difficult side to face this season. They are a rigid defensive outfit that is hard to break down however much of their success is due to the striker partnership. Che Adams and Lukas Jutkiewicz have 24 goals and 12 assists between them. Adams is catching the eye of Premier League sides 3 in his last four games. He is 19/10 to score anytime.

The Blues have conceded eight goals in their last four matches and have failed to win in five. They will struggle to keep the inform Swansea attack at bay however have won many matches when conceding. They are 6/1 to win and both teams to score.

The referee for this match will be Stephen Martin. The official has averaged 28.2 booking points in his 9 Championship matches in charge.

Swansea City vs Birmingham City will be televised on Sky Sports Football HD via the red button and kicks off at 19:45.

– The dominant possession they should have could crack the rigid visitors defence.

Odds and markets last updated on Tuesday 29th January @18:49 GMT. Keep checking back to see if there’s any updates to markets – the time stamp in the previous sentence for when we update tips on this page will be updated.