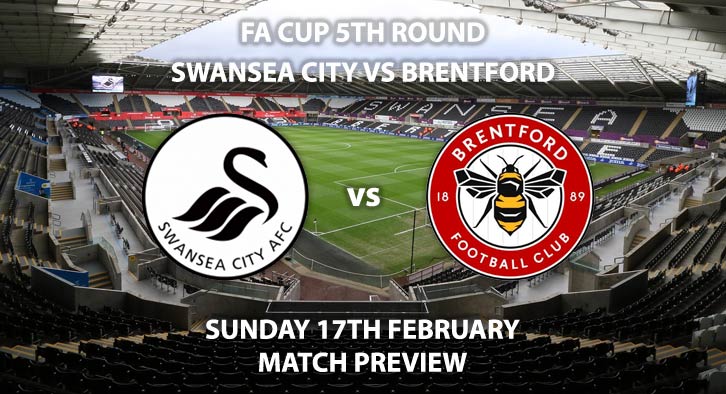 The FA Cup fifth round will see two Championship clubs battle it out for a place in the quarter finals. The hosts, Swansea City, have made it back to back seasons reaching this round for the first time since 1964/65. They dispatched of Gillingham in the least round with ease. Meanwhile, Brentford needed a replay to settle the score against Barnet in a tie they eventually won 3-1.

Swansea City are priced at 13/8 by SkyBet to win this tie. Recent home form is in favour of Graham Potter’s side – who are unbeaten in their last five matches. Their last round match-up against Gillingham was a routine victory as they ran out 4-1 victors. Oliver McBurnie was on the score sheet that match and is the team’s top goalscorer this season. Despite losing their last match against Leeds, McBurnie took his total to 14 for the league season and is 6/4 to score anytime this Sunday.

It seems the bookmakers can’t decide and have also priced Brentford at 13/8 to win this match.  Brentford beat Barnet in the last round however required a replay to do so. They will be hoping their torrid away form this season wont haunt them, with just two wins from 18 competitive matches on the road this season. Striker Neal Maupay is in hot form right now – with six goals in his last eight. He is also 6/4 to score anytime.

SkyBet are offering 6/1 for both McBurnie and Naupay to score.

The referee for this match will be Stuart Attwell. The official has been one of the more lenient in the Premier League this season and has averaged 30 booking points in his 9 top flight outings.

The match will be televised on BBC Wales and kicks off at 16:00.

– Just like the bookmakers I am finding this is a tough one to call. Could be a single moment of magic.