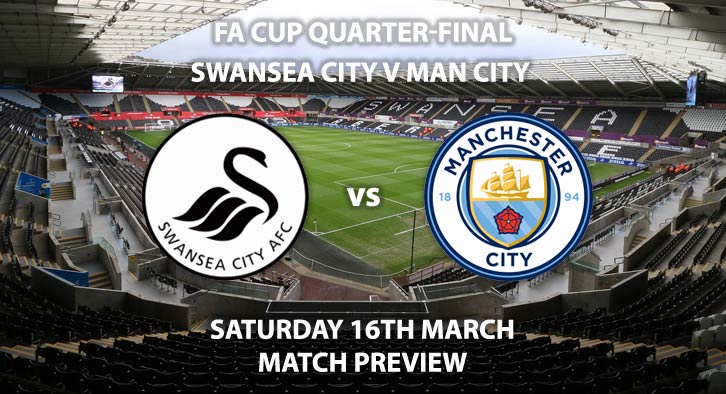 FA Cup action is back this weekend with favourites Manchester City travelling to South Wales to face championship Swansea City in the quarter-finals.

Both clubs progressed from the last round with the same 4-1 score line. The hosts were rampant in the second half against Brentford whilst Manchester City eventually raced away against Newport County.

Swansea are clear underdogs for this encounter and are priced at 18/1 to win by SkyBet. Graham Potter’s side have a huge task ahead of them that their recent form shows they will struggle with. They have lost 3 or their last five matches and won the other two. However, in this competition they have impressed, especially in the last round. Dan James was a standout performer and scored a memorable, pitch-long goal. His pace is probably the biggest threat to Manchester City’s defence, and he is 5/1 to score anytime.

Manchester City shouldn’t have too many issues this Saturday and are priced at 1/7 to win. Pep Guardiola’s side will not take this tie lightly however some big players may be given a rest after their 7-0 victory over Schalke. They have been rather outstanding across all competitions and are priced at 4/5 to win the FA Cup. Striker Sergio Aguero managed to get a brace in their last outi9ng and will prove a real headache to the hosts inexperienced defence. He is 13/5 to score first on Saturday evening.

In all competitions, City have begun matches strongly and scored first in nine of their last ten matches. SkyBet are offering 1/1 for over 1.5 goals in the first half.

The referee for this match will be Simon Hooper. With a place at Wembley on the cards, both sides will want to give all they have so I’d expect the man in the middle to be busy with the cards.

Swansea City vs Manchester City will be televised on BT Sport 2 in the UK and kicks off at 17:20 GMT.

– The away side will have no issues against an inconsistent Swansea side.

Odds and markets last updated on Saturday 16th March 2019 @16:37 GMT. Keep checking back to see if there’s any updates to markets – the time stamp in the previous sentence for when we update tips on this page will be updated.