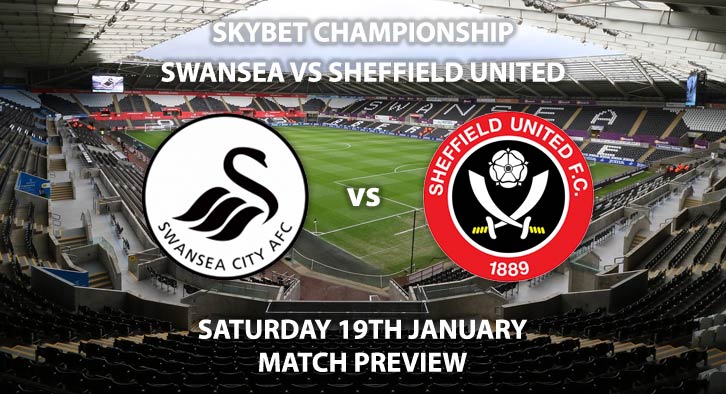 Swansea vs Sheffield United: The Blades will be looking to strengthen their grip on the automatic promotion places when they travel to face Swansea City on Saturday tea-time.

The Blades moved above Norwich on goal difference last weekend after their 1-0 win over QPR. Chris Wilder’s side could come into this game in third spot, with Norwich City facing Birmingham on Friday, so his side will know exactly what they need to do. United are in good form after a wobble in December, they have won their last four league games and only lost one of their last six in all competitions. David McGoldrick and Billy Sharp are still rattling in the goals upfront. McGoldrick scored the decisive goal last weekend – his tenth of the season. Gary Madine and Keiran Dowell have also been added to United’s squad as they seek to ensure they don’t miss out on a top-six finish after falling away last year. The Blades have also conceded once in four matches, recording three consecutive clean sheets.

Swansea’s form has been patchy lately. The Swans are unbeaten in their three but have won just once in five league games. They sit 13th in the table, but only six points off the top six. After relegation from the Premier League and a new manager in charge, this season was always likely to be one of transition for the Swans. That’s exactly how it’s turning out to be. Graham Potter has steadied the ship but will need the summer window to re-shape the squad. With a few more tweaks and additions, they could be a solid bet for a top-six finish next season. They have proven they can be a match for the best sides on their day, they just need to improve their consistency.

John Brooks is the referee for this fixture. The Englishman has officiated 12 Championship matches this season. In that time, he has accumulated an average booking points total of 44.6. Therefore, I would advise a maximum of 60+ total points for this fixture.

Swansea are capable of turning up against most sides on their day, but lack consistency. Sheffield United are in strong form and I fancy them to extend their winning run, this weekend.

Swansea City vs Sheffield United will be televised on Sky Sports Football HD and kicks off at 17:30.