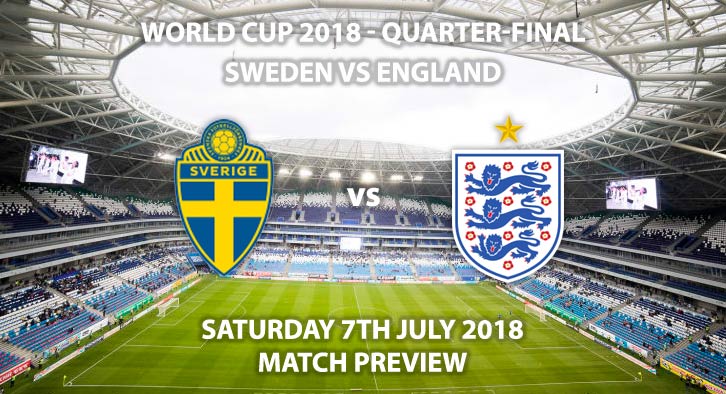 Sweden vs England. England can move one step closer to bringing football home with a win against Sweden when they meet in the quarter-finals of the World Cup.

Jordan Pickford’s heroics on Tuesday night secured the Three Lions’ spot in the last eight. Their spot-kick triumph was their first in 22 years, having won just one of their last seven penalty shoot-outs. It was redemption too for Gareth Southgate, who famously missed his penalty at Euro 1996 which saw England lose to Germany. Once again, Harry Kane provided the goal for England, moving onto six for the tournament. With Lionel Messi, Cristiano Ronaldo and Diego Costa all on the plane home, the golden boot award looks in reach. However, it’s a much bigger trophy Kane, and the rest of the country, have their eyes on. With only Sweden and Croatia/Russia standing in the way of the World Cup final, the whole country is daring to dream.

Jamie Vardy and Ashley Young are doubts for this game, with Danny Rose set to deputise at left-wing-back. Jordan Henderson and Kyle Walker are both a booking away from missing a potential semi-final clash and will, therefore, have to tread lightly. Henderson, in particular, has been one of England’s best players in Russia. The Liverpool captain has proven his importance to the side as the anchor in midfield. With Dele Alli and Jesse Lingard ahead of him, Henderson’s disciplined displays have earnt him plaudits from those who were criticising him not that long ago.

Despite being without their talisman Zlatan Ibrahimovic, Sweden have exceeded all expectations. Like England, they will feel that this could be their best chance to reach a World Cup final, following their 1-0 victory over Switzerland. Emile Forsberg’s deflected strike secured that win as they registered another clean sheet, their third of the tournament. Sweden lack a spark in attack, but they have only conceded two goals all tournament. A solid defence always gives you a huge chance of winning matches.

Bjorn Kuipers is the referee for this game. The Dutchman plies his trade in the Eredivisie where he has averaged 4.33 cards per game across 15 league games. With players running the risk of suspension, I don’t see there being a lot of cards in this one. Therefore, I would advise a maximum total of 40+ booking points for this game.

England were the best team against Colombia, yet needed a shoot-out to seal the win. They also have a terrible record against Sweden, who will be stubborn and hard to beat. That being said, this is a new England, and I don’t see any complacency creeping into Southgate’s team. If they can get an early goal, I think it should be a comfortable win. If not, then it could be a much trickier game for the Three Lions.

Keep visiting Tips and Previews ahead of games to get our suggested tips and correct score picks for the remainders ties in the quarter finals. Tips updated at 10:30 GMT on 7th July 2018.