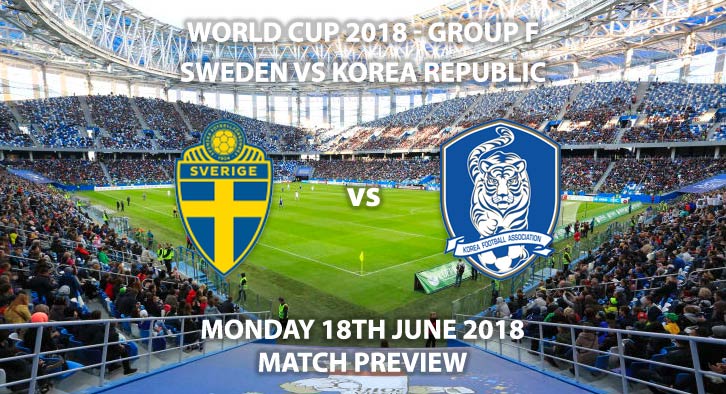 Sweden vs Korea Republic – Sweden and South Korea meet in what already looks like a must-win game for both countries should they wish to advance from the very difficult Group F.

Both sides fought hard to make it to Russia. After a brilliant qualifying campaign, Sweden finished 2nd to France in Group A but saw off the challenge of perennial World Cup outfit Italy in the play-offs to seal their place.

Korea started brightly, winning seven qualifying matches without conceding a goal in the second round. The third was not so easy. Shock defeats to Qatar and China brought the end of Uli Stielike’s reign and former u23 coach Shin Tae-yong was hired to steady the ship. Which he did, helping The Reds qualify for their 10th World Cup and ninth in a row. The most achieved by any Asian side.

Germany and Mexico face off in this group’s other game of the matchday. Reigning champions Germany are nailed on to get out of the group. Mexico have reached the Round of 16 in the last six World Cups. This screams trouble for both Sweden and Korea, once again highlighting the importance of three points here.

Sweden head coach Janne Andersson has created a strong team ethos, who are well-organised and defensively sound. They all work for each other. The omission, or lack of presence of the monstrous individual that is record-goalscorer Zlatan Ibrahimovic, may or may not have something to do with that.

There is still genuine quality in the squad, however. Marcus Berg has filled the large scoring shoes of Ibrahimovic, hitting eight in qualifying. RB Leipzig playmaker Emil Forsberg is a player with the ability to change a game too. Forsberg is 17/2 to be first goalscorer with SkyBet, an excellent price.

Sweden have good World Cup pedigree, coming runners-up to Brazil in 1958 and third in 1950 and 1994 too. However, it would take something rather miraculous for the Scandinavians to replicate those heights.

It would be even more unlikely should Korea do anything of the sort. Even getting out of the group would be a massive achievement. In Tottenham Hotspur’s Son Heung-min there is real star power though. History has told us that such an asset can take a team beyond their perhaps otherwise unfancied means. Both Son and Sweden’s Marcus Berg to get on the scoresheet is 15/2 with SkyBet.

Other notable players include highly-rated RB Salzburg youngster Hwang Hee-Chan, and captain Ki Sung-yeung of Swansea City, who has now made over 100 international appearances. There is perhaps a lack of experience in the squad, as only 5 players have over 50 caps, but Korea may well spring a surprise.

The Swedes will remain solid and have too much for Group F’s underdogs. That result can be found at 15/2 with SkyBet.

Sweden vs Korea Republic will be televised live in the UK on ITV 1 with Kick Off at 13:00 GMT.