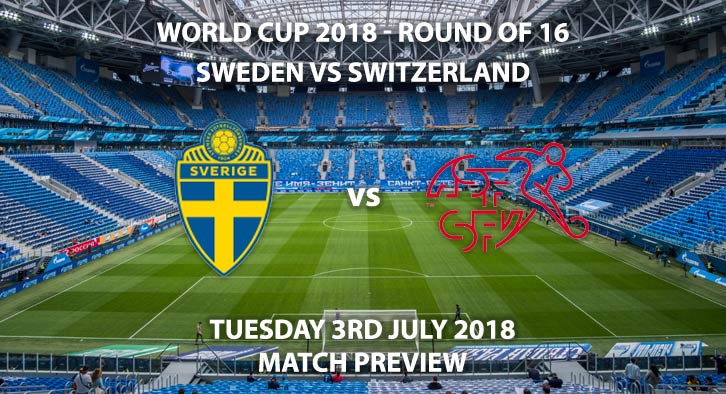 Sweden and Switzerland both battled through difficult groups to earn the chance to play each other for a place in the World Cup quarter-finals.

Whilst this may not be the most appetising of the last 16 clashes, neither team should be underestimated. Switzerland were value for their point against Brazil and Sweden were cruelly beaten by Toni Kroos’ last-minute wonder goal.

Switzerland proceeded to pick up four points from their remaining two matches (2-1 vs Serbia and 2-2 vs Costa Rica). Sweden opened their campaign with a rugged 1-0 win against South Korea before smashing the previously excellent Mexico 3-0. The latter result was a massive shock, especially as Mexico had so deservedly beaten Germany beforehand.

Switzerland are currently at their joint-highest ever World Ranking at 9th place. Manager Vladimir Petkovic will see this as a fantastic opportunity to reach a first World Cup quarter-final in 64 years. The Rossocrociati have lost just once in 20 matches. Incredible. Defence has been key to that outstanding run, keeping 11 clean sheets during that period.

Going forward has often been the issue for Switzerland against better teams. However, Xherdan Shakiri seems to be firing on all cylinders and forward Josep Drmic got on the scoresheet last time out. Mix a Granit Xhaka screamer in there (like he did against Serbia) and the potential to score is present.

Long gone are the days of Sweden’s World Cup success, but now have their defence to thank for being in this great position to try and replicate it. Janne Anderson’s team have kept four clean sheets in their last five games and have only conceded more than once to Germany, Chile and Netherlands in their last 13 (where they still only conceded twice). The attack is definitely the issue for Sweden though. Only two players in the entire squad having scored more than eight international goals (Ola Toivonen with 14 and Marcus Berg with 18).

Set pieces have been pivotal for Sweden and may present their best chance to win this tie. Captain Granqvist is The Swedes’ top scorer at the tournament with two penalties. Sweden will be heavily relying on the talents of RB Leipzig’s Emil Forsberg for creativity. A first World Cup quarter-final in 24 years could depend on it.

This may not be the most fluid and attractive game of football but it will be an intriguing one nonetheless. Both perennial underdogs, but something has got to give. It will more than likely be decided by a mistake or a moment of magic. The reward? Facing the victor of England and Colombia in the last eight. The stakes couldn’t be higher.

Belgium vs Japan will be televised live in the UK on BBC 1 with kick off at 19:00.

This looks a really tough game to bet on – we advise only backing one or two of the markets listed above today.

Don’t forget – we will be previewing as many if not all the FIFA 2018 World Cup Group Stage games. Keep visiting Tips and Previews ahead of games to get our suggested tips and correct score picks for the games.Tips updated at 11:05 GMT on 3rd July 2018.