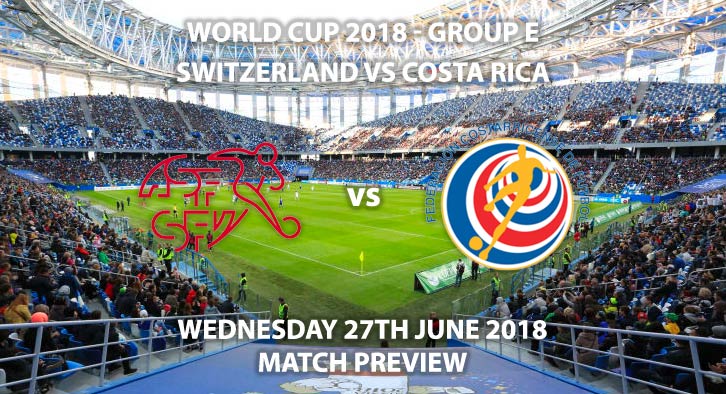 Switzerland vs Costa Rica. Switzerland and Costa Rica will face off in their final group stage match at the 2018 FIFA World Cup.

Switzerland are currently second in the group and will require a result from this match in order to progress to the knockout stages. Meanwhile, Costa Rica’s tournament will come to a disappointing end at full-time. They lost both their matches against Serbia and Brazil.

Switzerland could be depleted for the match as their two star players Xherdan Shaqiri and Granit Xhaka could face two-match bans. Both performed ‘politically incorrect’ celebrations in their 2-1 victory over Serbia. They are currently priced at 4/5 to win their final group match on SkyBet with those two’s availability unsure.

If Shaqiri is able to play, there is no doubt he could  steal the headlines and see his nation progress. He is priced at 7/4 to score anytime and 9/1 to score a brace.

Costa Rica have been disappointing given their impressive showing at the 2014 FIFA World Cup. They have only recorded three shots on target in the tournament, with all three coming from their 1-0 loss to Serbia. Their defensive efforts against Brazil were unceremoniously undone in the 91st minute to end their campaign. They are priced at 9/2 to cause an upset.

Marco Urena is the Costa Rican’s biggest goal threat. The Los Angeles FC striker is yet to find the back of the net but is priced at 10/3 to score anytime.

The referee for this match will be Clement Turpin. Both nations have been rather well behaved up to now, so I wouldn’t expect a wrestling match like some of the other World Cup matches so far.

Switzerland vs Costa Rica will be televised live in the UK on ITV 4 with kick-off at 19:00 GMT.

Tips updated at 18:00 GMT on 27th June 2018. Markets unlikely be updated again prior to the game kicking off.