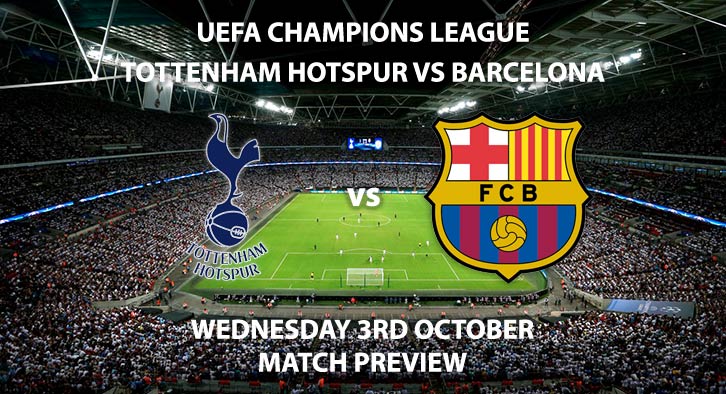 Tottenham will face European giants Barcelona in the UEFA Champions League this Wednesday.

Both clubs will be hoping for a glamorous European campaign alongside their gruelling domestic requirements. Spurs are in desperate need of an addition to their trophy cabinet whilst Barcelona need bragging rights over three-year consecutive winners Real Madrid.

The hosts are priced at 12/5 to win by SkyBet. Mauricio Pochettino managed a surprisingly promising group stage finish in last season’s Champions League. Spurs topped a group with Real Madrid and Borussia Dortmund in – so don’t write their off as a giant slayer.

You won’t need telling twice that Harry Kane will have all eyes on him this Wednesday. The 2018 World Cup Golden Boot winner is priced at 4/1 to break the deadlock – an incredibly tempting price if you are expecting an upset.

The visitors are priced at EVENS to get their Champions League off to a flyer. They are top of La Liga with 14 points from 7 matches. The Catalonian outfit are yet to assert their dominance much this season but how can you contain a team with Lionel Messi, Luis Suarez and Ousmane Dembele as a front three?

The Argentinian is 11/4 to score a brace. Messi has illustrated his class from all areas of the pitch and is a threat from open play or set pieces. Barcelona have only conceded eight goals in their seven league matches and are priced at 7/2 to win to nil. A risky market however could turn a nice profit.

The man in the middle of Wembley will be Polish referee Szymon Marciniak. Neither side have a reputation for racking up the cards however Champions League encounters can see blood rush to the head.

Tottenham Hotspur vs Barcelona will be televised live in the UK on BT Sport 2 and kicks off at 20:00 GMT.

– It’s tough to split these two on the European stage. Tottenham are a tough side for anyone to beat, however how can you not expect Barcelona to score.

Odds and markets last updated on Wednesday 3rd October 2018 @15:34 GMT. Keep checking back to see if there’s any updates to markets – the time stamp in the previous sentence for when we update tips on this page will be updated.