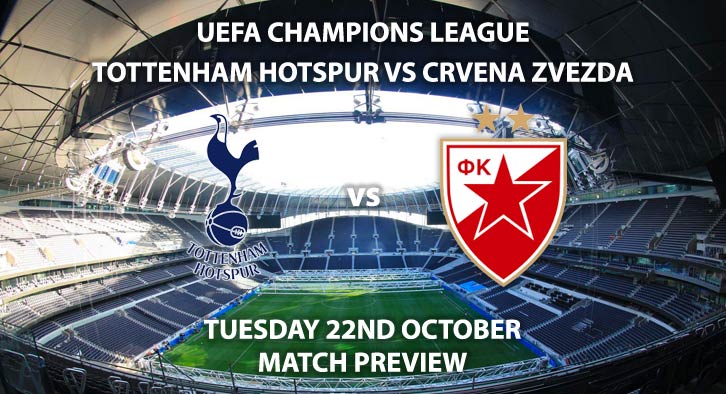 Mauricio Pochettino’s side will be eager to secure a win in this seasons Champions League campaign, as well as try and forget the embarrassment of their 7-2 defeat to Bayern Munich last time round. Spurs are without a win in their opening two group matches; Drawing with Olympiakos and losing to Bayern. Their opponents Red Star Belgrade currently sit 2nd in Group B, a place above Tuesday nights opponents. The Serbian based side currently sit on three points following their 3-1 victory over Olympiakos on matchday two but were defeated 3-0 away to Bayern in their opening game of the group.

Tottenham come into Tuesday nights fixture following yet another disappointing result in the Premier League. The 1-1 home draw with Watford means its only one win in five for Pochettino’s side, and questions are being asked about how much time he has left in London. Spurs dismal form in this campaign has clouded the judgement of many however. It’s easy to forget that only five months ago they were stepping out in a Champions League final for their first time in their history. What has gone so badly wrong for Pochettino and his players?

Red Star Belgrade however are in inspired form, and currently sit top of the pile in the Serbian SuperLiga. They have won 10/11 matches this season and have already established a four-point league at the top of the Serbian first division. Red Star aren’t to be underestimated in the Champions League, though. Last season they defeated Jurgen Klopp’s Liverpool 2-0 in the group stage at home, so Tottenham, if they aren’t already, will be fully aware they are in for a difficult task on matchday 3.

Tuesday night’s encounter is the first ever between these two sides, so there’s no chance of any recent psychological advantage going into this clash. However, Spurs can gain encouragement from Red Star’s UCL form. The Serbian leaders have lost their last four matches on the road in the group stage, so Tottenham will be licking their lips ahead of this one.

The Italian Marco Guida is in charge of Tuesday night’s clash. The 38-year old who officiates predominantly in Italy’s Serie A has taken charge of seven matches in all competitions this season, accumulating a total of thirty-seven yellow cards and two red cards. This considered, I would recommend a minimum of 20+ booking points for this fixture.

This match will be broadcast live on BT Sport 3 HD with kick-off scheduled to take place at 20:00 BST.