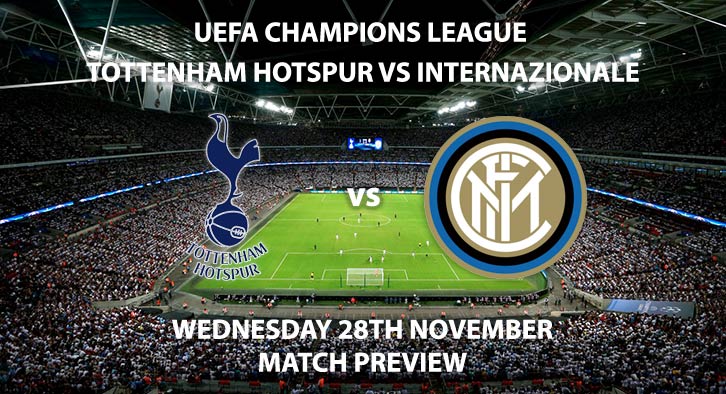 Tottenham will host Inter Milan in UEFA Champions League action as they must win to keep their European dreams alive.

Wembley Stadium will be the stage as Mauricio Pochettino’s side will need all three points in Group B. The visitors will be a tough outfit for the North London club, who drew 1-1 with Group leaders Barcelona in their last Champions League match.

Tottenham are favourites for this match and are priced at 3/4 by SkyBet. They enter the match on the back of an enthralling 3-1 victory over rivals Chelsea in the Premier League. However, their odds don’t reflect their performances in this competition as they have only managed four points from four matches. Their previous match was a late brace from Harry Kane revive Spurs as they narrowly defeated PSV at home. Kane is the star man at Wembley, scoring plenty of times for club and country. He is priced at 11/4 to break the deadlock.

Kane will be joined by an impressive attacking arsenal that also contains Christian Eriksen. The Dane has been in top form of late and is a danger from set pieces. Eriksen is 11/4 to score anytime.

Spurs have leaked goals in this competition with nine conceded from four matches. The last time these two faced, they conceded two in the last five minutes to Mauro Icardi and Matias Vecino. For Spurs to win and both teams to score, SkyBet are offering 21/10.

Inter Milan enter this match knowing a win would see them qualify and are priced at 10/3 to do so. Their previous UCL match saw them draw with Barcelona as talisman Mauro Icardi grabbed his third of the competition. The Argentinian caused many issues for Spurs in their previous encounter and is 11/2 to score first – a tempting price.

Despite only scoring five goals from four appearances, the Italian’s defence has been solid with five goals conceded. If they can silence the Spurs team and crowd and keep a clean sheet, then you could be getting odds of 5/1 on SkyBet for backing it.

The referee for this match will be Cüneyt Çakır. The Turkish official is a no-nonsense style referee so expect cards.

Tottenham Hotspur vs Inter Milan will be televised live in the UK on BT Sport 3 and kicks off at 20:00.

The home side are fortunate to have the attacking players they do in a situation like this. Tough match to call.

Odds and markets last updated on Wednesday 28th November 2018 @18:34 GMT. Keep checking back to see if there’s any updates to markets – the time stamp in the previous sentence for when we update tips on this page will be updated.