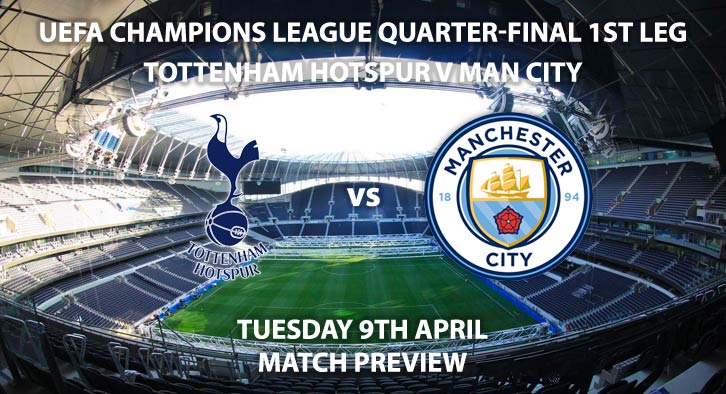 Tottenham vs Manchester City: Manchester City travel to Tottenham in the first leg of their UEFA Champions League quarter-final, looking to inflict Spurs’ first defeat at their new stadium.

The champions warmed up for this all-English affair with a 1-0 FA Cup semi-final victory over Brighton and Hove Albion. Gabriel Jesus’ fourth-minute strike proved the difference, in a game where City failed to reach their usual high standards. The Brazilian has stood in for Sergio Aguero, who has missed the last two matches through injury. Pep Guardiola confirmed the Argentine forward could play in Tuesday’s showdown after the weekend win, so all eyes will be on the team sheets, come 7pm. The Citizens have won 13 of their last 14 matches in all competitions, with their 0-0 draw in the Carabao Cup final against Chelsea their only blip. That relentless form seems them head away to Tottenham as clear favourites, having also beaten Spurs 1-0 away earlier in the campaign. Raheem Sterling could be a smart bet for first goal scorer. The Englishman has eight goals in his last seven games for club and country.

Tottenham will be hoping to make a mark in the first leg of this game, boosted by their arrival into their new home. They beat Crystal Palace in their stadium last time out, and have a full six days to recover since that fixture. Prior to that fixture, it was no wins in five league games, which has put their top-four place in jeopardy. Mauricio Pochettino will be desperate for his side to head to the Etihad, in two weeks time, with a lead, however slender that may be. In the previous round against Borussia Dortmund, Spurs blew away their German counterparts in the first leg which saw them through. Back-to-back clean sheets saw them win in Dortmund as well, but this will be a much tougher test.

Bjorn Kuipers is the referee for this fixture. The Dutchman has officiated seven top-flight matches this season. In that time, he has accumulated an average booking points total of 2.57 cards per game. Therefore, I would advise a maximum of 40+ total points for this fixture.

Tottenham will be desperate to make this tricky for City and the atmosphere could play a huge roll in that. It’s likely to be a tight, tense affair, as most first legs are. As a result, I can see this playing out as a draw, which would still benefit City more.

Tottenham Hotspur vs Manchester City will be televised on BT Sport 3 and kicks off at 20:00.

Odds and markets last updated on Tuesday 9th April 2019 @18:46 GMT. Keep checking back to see if there’s any updates to markets – the time stamp in the previous sentence for when we update tips on this page will be updated.

Remember to keep visiting the tips and preview area for further updates and betting previews around this week’s other European games.