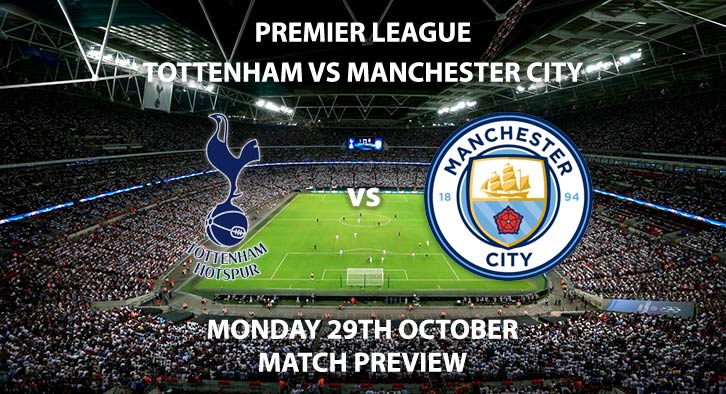 The hosts are fresh from their Champions League frustrations in Holland. A red card for Hugo Lloris and late PSV equaliser has left their European campaign in in doubt. Meanwhile, Man City enter the match on the back of a 3-0 win against Shaktar Donetsk and a 5-0 thumping of Burnley.

Spurs are priced 16/5 to get a win in front of a home crowd. They are currently 5thwith 21 points from 9 matches. They are only two points behind their opponents, with a win potentially reshaping the top six. The obvious goal threat for the home side is Harry Kane and already has five goals and one assist. For the World Cup golden boot winner to score first, SkyBet are offering 7/2.

Tottenham’s home form has seen them score five from three games. They will face the toughest defence the league has to offer but if they can break through more than once then you can get odds of 7/4 to score 2+ goals.

Manchester City are the current champions and are top of the league on goal difference. They are priced at 3/4 to come out with a win here but face a tough side. It’s clear that City have the attacking prowess to walk over any team in the league and the re-introduction of Kevin De Bruyne only improves their quality. Their long serving talisman Sergio Aguero currently has 6 goals and two assists and is his usual clinical self. Raheem Sterling has also gone from strength to strength with four goals to show for himself. You can get a decent price of 5/1 for both of them to find the back of the net.

The referee for this match will be Kevin Friend. From the officials six matches, he has averaged 28.3 booking points. I’d expect cards in this match, there usually are a lot of cards when the top six sides meet.

Tottenham Hotspur vs Manchester City will be televised on Sky Sports Main Event HD and kicks off at 20:00.

– They’ve been ruthless in recent showings whilst Spurs haven’t been their usual self in recent performances.