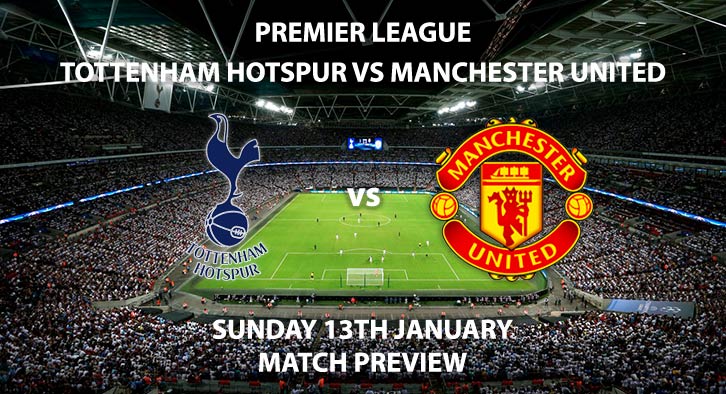 Tottenham vs Man Utd: Manchester United will be hoping to close the gap on the top four when they take on Tottenham in Ole Gunnar Solskjaer’s biggest test since taking over as manager.

The Red Devils have won all six of Solskjaer’s games in charge to date, although a trip to Tottenham will represent their toughest test. Last time out, United secured their route into the fourth round of the FA Cup with a 2-0 win over Reading. That win also secured back-to-back clean sheets for the Reds for the first time this season. Romelu Lukaku grabbed his third goal in as many games against the Royals.

It will be interesting to see if Solskjaer prefers the Belgium upfront on Sunday, or whether he sticks with Marcus Rashford. United are six points behind fourth-placed Chelsea and ten behind Spurs ahead of this clash. United have scored two or more goals in each of Solskjaer’s six games so far, it’s keeping them out that could be their undoing against Tottenham.

Spurs have enjoyed a good week so far, after beating Chelsea 1-0 in the first leg of their Carabao Cup semi-final on Tuesday. Harry Kane’s controversial penalty was the difference, taking his tally to 21 for the season. He has scored seven goals in his last six games, which is his best run of the season so far.

Tottenham have kept three clean sheets in as many games, which is down to the settled pairing of David Sanchez and Toby Alderweireld, with Jan Vertonghen injured. Alderweireld has had his contract extended by Tottenham for a further year, which means he can leave for £25m in the summer. Long-time admirers Untied will be hoping to lure him north in the summer – he could prove to be the missing piece in their defensive puzzle.

Mike Dean is the referee for this fixture. The Englishman has officiated 12 top-flight matches this season. In that time, he has accumulated an average booking points total of 50.8. Therefore, I would advise a maximum of 60+ total points for this fixture.

United have genuinely been transformed by Solskjaer’s arrival, although they were massively underperforming anyway. This is a different level of test and Spurs are in a great form at the moment. As a result, I’m going to edge towards a tightly-contested win for Tottenham.

Tottenham Hotspur vs Manchester United will be televised live in the UK on Sky Sports Premier League with kick off at 16:30 GMT.

Remember to keep visiting the tips and preview area for further updates and betting previews including Monday nights game between Manchester City and Wolverhampton Wanderers.